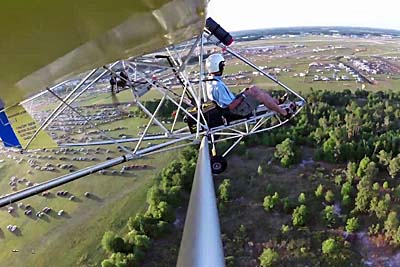 Zigolo on display at the Jingmen airshow in China. 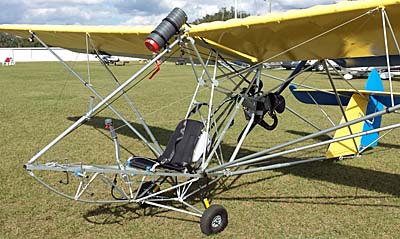 Here’s the gasoline engine; the electric-powered version is shown at top.

I didn’t see this one coming. Maybe you didn’t either? In the new millennia gold rush represented by companies either being bought by Chinese businesses or gaining investment from wealthy Chinese business people or by setting up shop to sell in China (or even Cessna’s ill-fated effort to have their Skycatcher manufactured in China), one element I’ve never heard of is Part 103 in China. This least-regulated-of-all aviation category is solely an American thing, isn’t it? Well … yes and no. Germany has opened the door to a Part 103-like development in that country under the 120-kilogram class (using a number that is 264 pounds or very similar to Part 103’s 254-pound empty weight limit). England has their SSDR class (SSDR being the abbreviation for Single Seat De-Regulated). Despite following those developments, I’ve never heard a word about China and any less-regulated sector.

“The first Zigolo in China was introduced to the public in that nation on July 17th at the Jingmen Airshow,” reported representative Chip W. Erwin. The example was supplied in kit form by Aeromarine-LSA of Lakeland, Florida and Chip assembled it in just three weeks. Erwin, many will recall, was the main man behind the SportCruiser that ranks high in the U.S. market. After getting pushed out of the company he founded by an aggressive investor, he established a new enterprise in China. So, the following announcement might be expected, “Concurrently [to the aircraft’s debut], a Zigolo assembly facility was established in the AVIC R&D center in Jingmen to supply the Chinese market with Ready-to-Fly (RTF) Zigolos.” Now, here’s the part of their announcement that caught me by surprise. “The Chinese CAAC recognizes the FAA Part 103 rule,” Chip related, “which means that Chinese customers can actually fly legally and fly now in China, something that has not been so easy in LSA or other GA aircraft to date.” No kidding! Virtually everyone agrees the China market for aircraft is potentially enormous, but the key word is “potentially.” It is developing but seems in well in the future. Maybe not.

If Chinese authorities permit Part 103 aircraft now, Zigolo could have a near-term impact on that market. Given its extremely low price, many Chinese flying enthusiasts could climb aboard. “The Chinese have been shipping thousands of RTF radio-controlled (RC) model aircraft to the USA,” notes Erwin. “Now they will have the capability to build a man-carrying light aircraft for their own market. Chip noted that the technology and design gap between large RC aircraft and this ultralight motorglider is small; with the coming electric-powered version of the Zigolo, the gap narrows further. Want to know more? Zigolo is presently available to Americans in kit form with typical build time estimated at about 150 hours. Delivery positions are now available for the RTF version and first deliveries are planned for later in 2014. Come get a closer look at both electric- and gas-powered Zigolo ultralights at Airventure Oshkosh 2014. Watch how each flies in the ultralight area — now referred to as the “Fun Fly Zone” by area organizers. Oshkosh attendees can find Zigolo at booth 939. Aeromarine-LSA plans to offer an Oshkosh show special for new orders. I love the tagline Chip invented as it sums up the well-priced, simple aircraft — Zigolo: everything you need, and not much else.