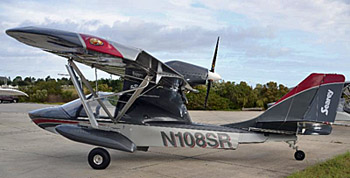 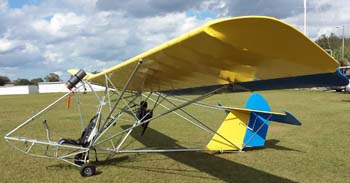 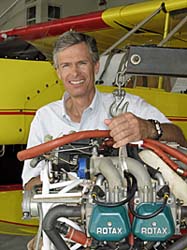 Rotax expert Phil Lockwood will give his signature engine presentations at Sebring 2014.

People are starting to arrive in Florida. Today, we had a pleasant lunch conversation with Dynon’s president Robert Hamilton. He observed that Dynon enjoyed their best year ever in 2013 and they continue bringing new avionics innovations at modest prices. Fellow Dynon staffer Kirk Kleinholz was in the state even earlier traveling around offering tech support. Great work, Dynon-ers! As we all enter the last-minute rush to head to the tenth Sebring, a few news items arrived and I’ll run through them so you have some idea of what will be present at the LSA event.

Progressive Aerodyne announced they received FAA acceptance for the Elite version of their Searey Amphibious LSA. Searey Elite is mightily powered with a Rotax 914 turbocharged engine; you can see a short video of it launching in this article. “This stylish aircraft offers many advanced features such as a large sliding canopy that can remain open while flying. The Searey Elite also has the very latest in-flight, GPS, [Angle of Attack indicator] and Gear Position warning systems, a wide cabin, and much more,” said the company. Airworthiness certification for the Searey Elite was issued in December 2013, and the first two airplanes will go to private owners in January 2014 at a ceremony to be held at Progressive Aerodyne’s manufacturing facility in Tavares, Florida. Searey Elite will also be on display at Sebring 2014. Adam Yang, CEO of Progressive Aerodyne, had this to say about the certification of the Searey Elite, “We are so pleased and excited about being able to offer our Searey Light Sport Amphibious Elite to the market. We believe that our airplane fulfills a much anticipated desire for those customers who want to experience the fun and adventure of flight, both in the air and on water, with ease.” Unlike some intriguing LSA seaplanes, you can buy a ready-to-fly Searey or Searey Elite now.

Something completely new: Aeromarine-LSA — a company name you may not know though you know some of their products such as Mermaid amphibious LSA — from a familiar name in the industry, Chip Erwin. Aeromarine-LSA announced the first American flight of the new Zigolo SSDR concept motorglider. A Single Seat De-Regulated (SSDR) aircraft, Zigolo does not require any license, medical, registration, or certification to fly it. SSDR is a European initiative that closely resembles Part 103 but at 225 pounds empty, this superlightweight flying machine will have no trouble qualifying. The 36-foot span Zigolo is powered by a 25-horsepower gasoline engine, however, the company said an electric-powered option is close to completion. Electric power will provide self-launching capability for gliding or quiet and smooth dawn patrols and evening flights and still met the SSDR criteria. Zigolo is available in a classic kit for only $14,500. This price includes the engine and a complete aircraft rescue parachute system. Build time is only 100 hours. An even better option is the Almost-Ready-To-Fly aircraft referring to a finished Zigolo disassembled and packed in one easy-to-ship crate. “Some Assembly required” means a pictogram assembly manual and an afternoon to put it together! The Almost RTF Zigolo includes everything you need to fly plus a complete aircraft parachute rescue system all for only $16,000, just $1,500 more than the 100-hour kit.

The Rotax guy that Rotax mechanics seek for advice is Phil Lockwood. As the largest Rotax distributor and service center in the country, he and his team have learned the old fashioned way about problems … by working on hundreds of engines and seeing any problems for themselves. Lockwood also has a direct connection forged over many years with Kodiac guru Eric Tucker and the folks at the factory in Austria always check in with Lockwood to see what’s happening with their engines in the field. So when it’s THIS guy, Phil Lockwood, who offers you his advice for free in an airshow forum, people flock to the venue. Phil will be doing his standing-room-only presentation again at Sebring: Rotax 912 series on Thursday the 16th and Saturday the 18th in Forum Area 2 from 10:45 am to 12:00 noon. A Rotax two stroke forum will be held on Friday the 17th from 10:45 am to 12:00 noon in Forum Area 2. Phil also added, “Lockwood Aviation Supply will offer special extended hours for customers who would like to shop and pick up parts during the Sebring US Sport Aviation Expo. The company’s warehouse is located at 1 Lockwood lane just a few hundred yards to the south from the show on the Ramp at the Sebring Airport.” Hours are Saturday from 8:00 AM to 5:00 PM and Sunday from 8:00 AM till 2:00 PM.