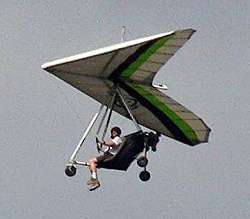 Going fast is what Arion’s Lightning appears to do even before firing up its 120-hp engine. 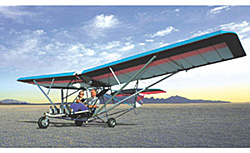 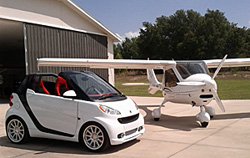 Smart transportation? The CTLS can zoom along at nearly 120 knots but it also offers terrific visibility. So does the Smart convertible at half the speed.

I’ve observed aviation for more years than I’m comfortable admitting. As an aviation journalist I’ve often had a front row seat. I’ve talked to a ton of pilots (one of the great joys of my life is to have met so many fine folks). Over those years, I’ve distilled the kind of pilots we are to one or the other. Yes, just that simple: this kind or that. *** I believe you either fly to “Get Up,” or “Go Long.” Go Long flyers include all those who want to go some distance in their flying machine. Flying your own plane is a great way to travel. Speed is a big part of why flying is useful but that quality is merely one aspect of the enjoyment. *** Me? Sure, I like to Go Long. I’ve logged hundreds of hours of cross country flying, to all corners of America and some out of the USA. A fair number of flights were on an IFR flight plan, most were easy VFR cruises, and all of it was educational and inspiring. Sometimes it was even practical transportation. My rough calculation is that flying (in the airplanes I’ve been privileged to fly) was up to three times as fast for about twice the cost in fuel, compared to driving. *** But I readily admit that mainly… I’m a Get Up kind of pilot. I get bored (not to mention uncomfortable) flying for hours at a time in as straight a line as possible. Neither do I need to fly particularly fast. An old gearhead saying is, “Speed costs money. How fast do you want to go?” Slower flying is fine for me. I like to see the planet from above. I like learning about my surroundings by viewing them from aloft. I also like to catch thermals, an aviation activity that provides endless new experiences within 25 miles of almost any airport. I could name dozens more reasons why meandering around the sky is fun. *** None of these kinds of flying require you fly a great distance from your home airfield. In conversations at airshows over the years I’ve found a significant percentage of all pilots fly for similar reasons. More flights take off and land at the same airport than go the distance. *** If you want to go places, fast is good and faster is better. Operating a GA airplane at speeds above 200 mph gobbles up the miles on regional travel. The trouble is that when going national in our great big country, 200 mph still isn’t that fast. Even in a jetliner at 500 mph, America is a vast expanse that takes hours to cross. *** I’ve long said that if the world of Star Trek ever arrives we will all say, “Beam me up, Scotty.” Why travel any other way than instantaneously? …if you could. But in that fantasy world, pilots would still fly for fun. Beaming magically around the planet would not replace the wondrous visibility found from an open cockpit ultralight. I think all pilots would still enjoy flying airplanes even if Captain Kirk’s transporter was practical and inexpensive. Wouldn’t you? And if you say, “Yes!” does that make you a “Get Up” pilot? Isn’t it about the view and experience more than hustling down a numbered airway to the next airport?