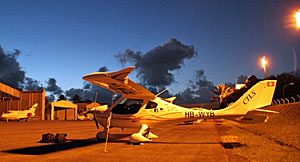 For flight days of 17-hour legs, early starts are required. 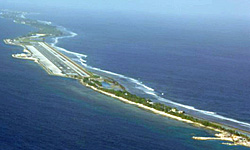 After crossing thousands of ocean miles, the atoll of Majuro with its airport surrounded by water was a welcome sight. Majuro is capital of the Marshall Islands.

Some of the flight was done in near formation proximity. It’s nice to have a “wing man.” 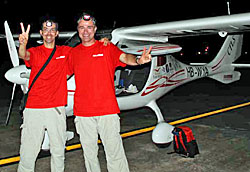 Yet another arrival after dark, a product of very long flying days, but the boys maintain their smiles. 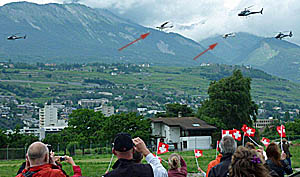 Escorted by a trio of helicopters to waiting crowds waving national flags, the Swiss pair return home after 51 days.

Two Swiss pilots embarked on a round-the-world flight on April 30 and 51 days later they are back home in Switzerland. Yannick Bovier, 37, and Francisco Agullo, 41, created an expedition they call “Azimut 270” to celebrate 100 years of aviation in Switzerland, a country known for its natural beauty and for being bankers to the world. *** The dynamic duo returned safely on Saturday, June 19 after crossing two oceans, confronting suspicious government officials for country overflight permission, paying high landing and permit fees, battling fatigue and loneliness, performing routine maintenance that comes with so many hours logged, plus having to watch what foods they consumed during flight legs that several times started before dawn and ended after dark. (On-board bathrooms have yet to be installed in the first Light-Sport Aircraft making such biological necessities a real challenge). *** Starting on the last day of April, the duo leaped the Atlantic to Brazil by May 8 and then crossed the Caribbean to Miami, Florida, USA by May 13. After crossing the States, Bovier and Agullo made a series of very long flights to cross the Pacific on June 3. The pair wrote, “[We flew over] 15,877 kilometers (about 10,000 miles) of water… in 76 hours.” The arduous passage across the planet’s largest ocean brought several interesting experiences, including landing on an atoll on the Pacific Marshall Island of Majuro. *** The ocean crossings were noteworthy but obtaining permission to overfly some middle eastern countries brought difficulties of another sort. Fortunately Bovier and Agullo are airline pilots and had familiarity in dealing with aviation authorities in many countries. They also were supported by teams at home that helped with permits and logistical efforts, as well as weather reports. *** “The story of these two pilots as reported in their log is a fascinating read,” reported Flight Design USA president Tom Peghiny. The Swiss pilots kept their many followers regularly updated with an online “logbook” that most pilots will enjoy reading. All photos courtesy Azimut 270