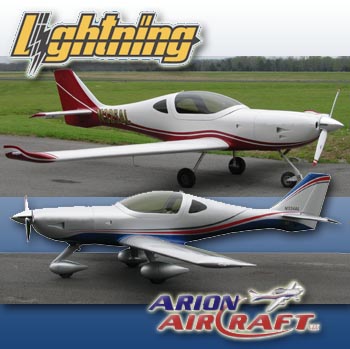 After selling 40 aircraft under the Experimental Amateur Built (EAB) rule, Arion has now completed their SLSA approval just in the nick of time before the season-launching Sun ‘n Fun starts. Welcome to Lightning — SLSA #96 — from Arion Aircraft, which is our 69th company to enter production of Light-Sport Aircraft. *** Lightning got its start back when Jabiru-man Pete Krotje, his son Ben, plus Nick Otterback were dealers for the Spanish Esquale. That lead to the lovely low-wing Lightning though the design borrows from several light aircraft. It may sound like an organic development but the results are definitely worthy. I was highly impressed with a flight in an earlier EAB model, which did not have the speed limitations of LSA. “Extra wing area was added to bring wing loading and stall speeds into compliance with the applicable standards,” said Nick. *** Arion won approval on April 15, 2009. I’m pleased to report we expect this airplane in the LSA Mall just inside the main entry gate of Sun ‘n Fun starting April 21st. Beside its sweeping lines, the $93,900 base price tag will also draw attention. *** Arion is organized as a different company from Jabiru USA but it shares some of the same brain trust. “We actually had lots of folks give us input on this design,” Pete credited graciously. Good job, all!