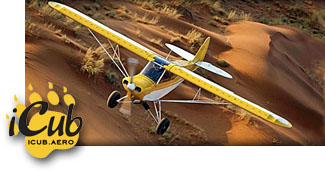 I’ve flown Savage and found it fun to fly and livelier than Legend Cub or Sport Cub. 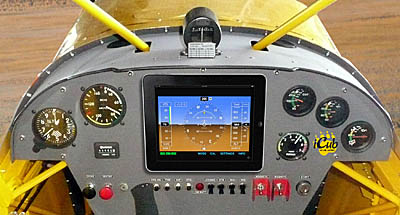 Yes, that’s an iPad in the panel and what you can’t see is an iPhone in a rear mount. Apple invades the cockpit. The “magical” device is backed up with conventional instruments. 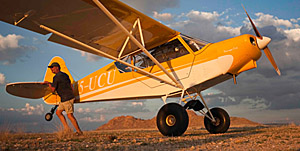 SportairUSA, run by proprietor Bill Canino, has long been an innovator in the LSA business. His company doesn’t build Light-Sport airplanes but Bill has triggered several interesting add-ons: he was one of the first (along with Flight Design USA) to install parachutes on all StingSports; he developed the GreenLine engine monitor system, he offered the Straight & Level button to help those caught unexpectedly in no-visibility conditions; and last year at AirVenture he rolled out the ForeSight enhanced visibility system… and this list is not exhaustive. *** For AirVenture 2010 just six weeks away, he’s got a whole new concept. First is iCub. Previously distributed under the model name Savage (still retained for some models), the sorta-Cub-like taildragger manufactured by the Zlin company of Czech Republic will now be distributed by SportairUSA, adding to their low-wing Sting series and their high-wing Sirius , both built by TL Ultralight in Czech. But iCub is more than yet another Cub replica adding to offerings from American Legend and CubCrafters. For one it’s powered by Rotax — the other two prefer the Continental — and it’s shorter coupled. Both differences provide stronger performance. But it’s better, much better (well, at least if you’re an Apple fan like 100 million other owners of their iPod/iPhone/iPad line). *** The primary instrument in iCub is… an iPad. Yup mounted right in the panel and given an enormous ecosystem of apps — some of which are for aviators — iPad can offer tremendous versatility at lower cost than present avionic offerings. A tandem seater like the other two Cub replicas, iCub instrumentation for the rear seat occupant is… an iPhone 4. Both can run the same software and both are devices a huge number of people already know how to use. How cool is that!? Plus, it has on-board wireless for the devices to talk to one another and to another iCub within reception range. *** Price of the iCub is projected to be below $100,000 even with extended gear and 26-inch tundra tires; thousands less than Legend or CubCrafter models. The iCub website just went live and in-person demos are planned for the big summer airshow. Better come check it out.