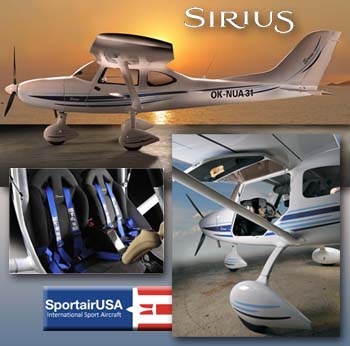 In studio photos, Sirius conveys a smooth and modern aircraft. GA pilots will love the lengthy standard equipment list and can even add sophistication like the ForeSight infrared vision system that lets a pilot “see” even when visibility is obscured. Watch the Sirius video.

Most folks following the Light-Sport Aircraft development know the Sting, refreshed for the U.S. market with the S3 model. I covered the development announcement of TL Ultralight’s new high wing. Now, welcome to the TL3000 Sirius as the newest SLSA to hit the market in a blur of new offerings seemingly triggered after the industry hit #100. *** Importer SportairUSA maneuvered their low-wing, all-carbon-fiber Sting S3 into one of the best-equipped LSA on the market. Adding a high wing gives the company new versatility to meet market interest. *** I see the potential for keen demand from GA pilots, especially those legions trained in high-wing, yoke-controlled Cessna models. Sirius’ 48-inch wide cabin is nine inches wider than a C-172 and it can haul 420 pounds of payload even when topped off with 30 gallons of fuel that can take you 800 miles (numbers will vary depending how you equip a Sirius). To build payload like its low-wing sibling, the composite Sirius also makes broad use of carbon fiber. With cruise listed at 116 knots (133 mph), Sirius is a speedy performer. *** Sirius can also be float equipped and since it has been designed for 1,430 pounds of gross, those floats won’t displace much payload. *** Sirius comes in at $130,900 but is extremely well equipped with TruTrak electronics, Garmin 496, PCAS collision avoidance and SportairUSA’s own GreenLine EMS plus radio and ELT, a Galaxy airframe parachute and more.