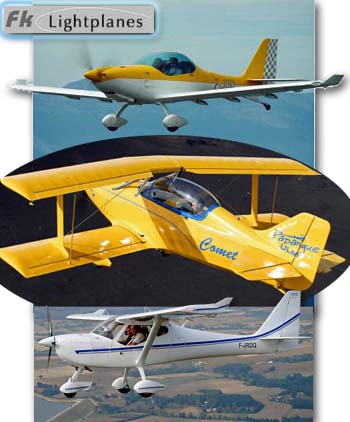 Fk Lightplanes airplane trio is the Fk14 Polaris on top (the model selected to be Cirrus Design’s SLSA though that project is presently suspended); FK12 Comet in the middle with the folding wings and multiple cockpit configurations; and the Fk9 ELA. Read an up-to-date report in the December 2009 issue of Light Sport and Ultralight Flying. Photo by Frank Mullez, courtesy of Fk Lightplanes

Light-Sport Aircraft are nothing if not diverse. We have all manner of aircraft on our SLSA List of 104 approved models. Germany’s FK Lightplanes illustrates diversity through their trio of models: high wing Fk9 series; biplane Fk-12; and low wing Fk14. *** In May 2009, the newest iteration of the Fk9 series was flown by designer Peter Funk. The Fk9 ELA (a reference to European Light Aircraft, a new class EASA is planning) is a stretched, roomier model of the popular series. The changes should play well in the American market. *** Peter Funk commented, “It seemed that [Fk9 ELA’s new] winglets are improving control efficiency and low speed characteristics.” In addition, the newest model boasts a larger cabin space, a larger panel with room for big screens, more baggage area, electric flaps, and optional longer-range fuel tanks. The versatile Fk9 ELA is also available on straight or amphibious floats or in taildragger gear. *** Another feature-laden model is the Fk12 Comet with its swept biplane wings that also fold. You can have Fk12 with a full bubble canopy enclosure, or two open cockpits with windscreens, or a front, covered cockpit and aft windscreen only. *** Though still under contract with Cirrus for the low wing model, Fk14 Polaris is sold in Europe with a choice of tri-gear or taildragger. Fk Lightplanes has also experimented with powerplants including an engine from Mercedes. As the company completes work toward SLSA approval for Fk9 ELA and Fk12, they are also seeking additional representatives for the U.S. market. Interested?