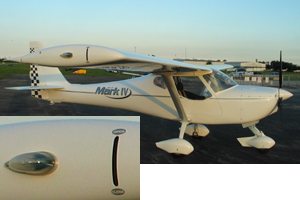 Here’s one of two newly received FK9 Mark IV B models imported by FK Lightplanes USA. The inset photo highlights a slot hiding a lever that allows a single person to fold the wings in minutes. You can read my pilot report on the FK9 to appear in the November 2006 EAA Sport Pilot (and later posted on ByDanJohnson.com).

The feature of folding wings is credited with the sale of many aircraft by brands such as Kitfox and Kolb (among numerous others). Promoting the Sport Pilot certificate, I’ve visited flight schools at busy airports where one of the obstacles to growth — and to adding a LSA as a trainer — has been a lack of more space to hangar their fleet. Now with FK Lightplanes USA bringing in their first two FK9 Mark IV B models, this could change. *** The Florida-based importer for the German design used in many of that country’s flight schools recently took delivery of its first two “B” versions configured as they will routinely import them. Their selection includes two-feet less span with the 100-hp Rotax 912S and folding wings as the standard model (though the 80-horse, non-folding wing models can be special ordered). The first customer, taking both aircraft, was the cooperative LetsFly.org that helps buyers share ownership of LSA and other aircraft.