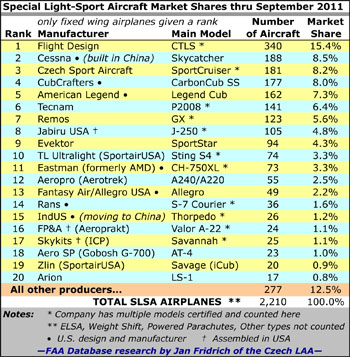 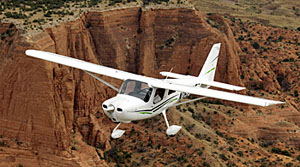 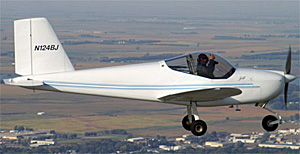 Sure enough, by several measures and based on multiple conversations, 2011 is shaping up to be a better year than 2010. Of course, that’s not saying much as all of aviation worldwide was slow last year and in 2009. When you’re near the bottom of the well, everything starts looking up. *** With those thoughts in mind, we present the newest market share report, this one through the third quarter of 2011. In recent years we’ve had folks tell us we ought to show charts of this year’s or this quarter’s performance. But most readers want to know the “installed base,” to borrow a phrase from the trend-setting tech industry. When people talk about Windows versus Apple market share or iOS versus Android, they generally mean how many of all buyers have those systems. *** Nonetheless, we recognize pilots are hungry for more recent info. So for several years, we have discussed near-term performance in the text of our articles even while we present a graphic showing FAA N-number registrations since the beginning. The nearby chart has become a staple of this industry used by all sorts of people: other airframe producers, avionics and other equipment manufacturers, insurance companies, FAA, and member organizations. *** For the last nine months, Cessna is far and away the leader, with 140 registrations logged in 2011. The Wichita giant once boasted of nearly 1,000 Skycatcher customers and they have been fulfilling those orders with increasing speed. Following them is CubCrafters with 29 registrations this year so far. Other top producers include CSA’s SportCruiser (20), Flight Design (17), and Jabiru USA (8). *** One new arrival in the top 20 is Arion and their Lightning (6 in 2011). Another up and comer is Pipistrel, fresh from their third-in-a-row victory at the NASA Green Challenge. For all other companies, 2011 has continued the very sluggish sales pace of 2008, ’09, and ’10. Notice: As always, we observe for you that all numbers here are derived from FAA’s N-number registration database. These figures are not identical to sales logged by the companies although, over time, the numbers get closer.*** A few kit producers deserve mention even though we struggle to count these numbers accurately due to confusion by entry clerks regarding the fuzzy distinctions between kit ELSA, amateur-built kits, and ELSA converted from two-place ultralights (the latter being, by far, the largest single component of what are called Light-Sport Aircraft in America). Nonetheless with 132 FAA N-number registrations, Van’s Aircraft and their RV-12 earned our attention. Rans is another significant kit producer of aircraft meeting all parameters of Light-Sport Aircraft — the Kansas company also sells SLSA and ELSA versions of some models. *** Cessna’s rise to the #2 slot from the #8 place at the beginning of the year pushed everyone else down. Onetime #2 producer American Legend now finds itself in #5 with 5 new registrations in 2011. *** Yet the top 10 have remained remarkably stable, and indeed, they account for more than 70% of all SLSA fixed wing airplanes delivered since day one in April 2005.