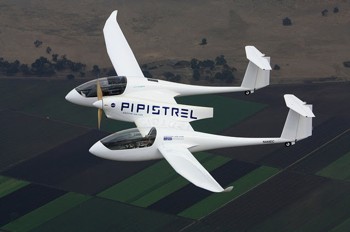 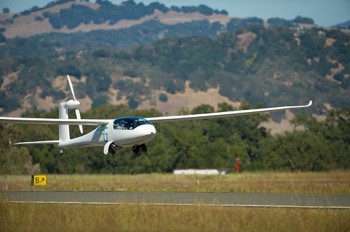 Up to the Challenge: eGenius takes flight.  photo courtesy NASA

Posting from Istanbul, Turkey where I’m on vacation with my family, but just couldn’t wait another day to talk a bit about what most everybody in aviation’s been talking about these last several days: the CAFE Green Flight Challenge (GFC). *** History was made when the Pipistrel Taurus Electro G4 twin-fuselage electric-powered aircraft carried four adults, around 1000 lbs. of batteries, one electric motor with a bit prop, and a lot of engineering and piloting savvy to victory in the GFC. They earned themselves $1.35 million in the process. Huge and well-deserved congratulations to Pipistrel!But for my money, the deeper story is not just that they flew off with the biggest aviation dollar prize ever, or even that they accomplished the task of flying 200 miles on one battery charge while also averaging more than 100 mph for the entire flight, or that they did it while “burning” the equivalent of 1 gallon of gas per passenger, or four gallons total…but…that they accomplished all that yet consumed the equivalent of around 1/2 gallon of gas per passenger! *** Looked at another way, they took off with full “tanks”, and landed with just a bit less than the electricity equivalent of half a tank of gas. *** And get this: The eGenius entry had similar economy numbers, though it used a very different design approach, using a conventional motorglider planform, albeit with a tail mounted motor to afford a larger, more efficient prop. Also, it flew with two, not four, people onboard. *** So here we have two teams with different aerodynamic approaches that both met the challenge, and met it easily. *** And as soon as they release numbers on the Embry Riddle Aeronautical University Eco Eagle, I’ll post them too, as the ERAU team also flew but as a demonstration flight — they were disqualified from competition for a couple technicalities. *** But here’s the deal, restated from my last post: at least two, and possibly three of the entrants didn’t just meet the task: they killed it! *** Here are the official numbers: e- Genius (which won the second place prize of $120,000 as well as the Lindbergh LEAP award of $10,000 for quietest aircraft) tallied 375.8 passenger miles per gallon. *** And the G-4? An astounding 403.5 passenger miles per gallon! *** That is nothing less than stunning. *** Electric flight is here.Yes, battery tech needs to keep advancing, and dramatically, to bring e-flight into the mainstream GA hangar. But the GFC proves that the page has been turned. From here on in, it’s a race to market affordable, practical electric airplanes. *** As Eric Lindbergh, Lucky Lindy’s grandson, said recently, the first company to make a viable electric trainer will usher in the new age. The G4 accomplished its victory on around $7 worth of electricity. Imagine the rental/training cost of an e-trainer being $125…or $135 “wet”. Kinda funny. *** Dr. Calin Gologan, the Romanian designer of the PC Aero Elektra One, which won the LEAP award this year at Oshkosh, believes battery efficiency (expressed as energy density) will improve by 11% per year. In 9 years, that’s double what we have today. Anybody want to bet it won’t happen faster than that? *** Lest we forget, kudos and bravissimos to Pipistrel, the eGenius team, the Embry Riddle team which converted a Stemme motorglider, to Jim Lee, who entered the contest with a conventionally powered Phoenix motorglider (I’m looking forward to seeing his numbers too), and all the others who originally entered but couldn’t quite make it to the starting line. *** They all have their place in history, and all mark the beginning days of a tide that will change aviation forever. *** Look for my just-submitted story on electric flight in the upcoming December issue of Plane & Pilot, which hits the stands in Nov. *** Meanwhile, check out this video of the event’s highlights.