In mid-October, FAA provided another update to the Light Aircraft Manufacturers Association. It speaks to bigger — and faster — flying machines ahead for Light-Sport Aircraft. Let’s look at one aspect of the regulation-in-progress. 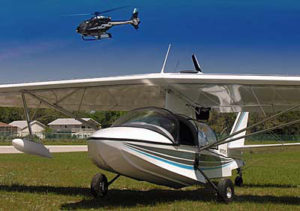 First, a caveat: While FAA is communicating some of the ideas they are planning for LSA this is an effort of rule writing likely to see more changes.

What LAMA reports to its members and what we provide here is not certain …although it remains well supported at the top of FAA. Even higher in the federal hierarchy, the Department of Transportation recently gave a go-ahead to continue their work. Not all currently planned ideas may survive either the internal debate nor the public comment period.

This phrase, Single Lever Control, communicates two things: (1) that the system on the airplane seen in the video adjusts the prop to optimal pitch for the phase of flight, and (2) that the system does so based on the pilot’s movement of the throttle combined with its own information about parameters of the aircraft at that time. In short, call it an “auto prop.” 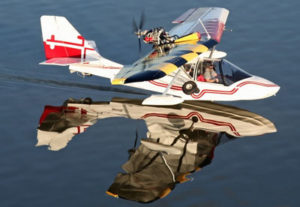 Progressive Aerodyne‘s Searey is the leading LSA seaplane on the market today. It is the test airframe for RS Aerotech’s single lever control system.

The idea of an “auto prop” (my term) is that when you are taking off, the propeller should pitch for climb. Once aloft at altitude and when the pilot has retarded the throttle but the aircraft knows its height, the prop should automatically go to cruise pitch. Importantly to FAA and its desire for “safe, simple, easy to fly” LSA, the pilot workload is minimal. Move the throttle where you want and the airplane knows how to pitch the prop.

While others will also enter this development field, RS Aerotech is the pioneer and has been accumulating test results for several years. However, Cirrus has used a SLC system for many years. A subtle difference is that Cirrus still requires a lever for mixture where a Rotax iS-series engine handles that function for the pilot… a true Single Lever Control setup.

Those interested in more technical details and plans than presented in this brief post can review RS Aerotech’s slide presentation (most devices should show this easily; if not use the company link above and click or tap on the “Downloads” tab). 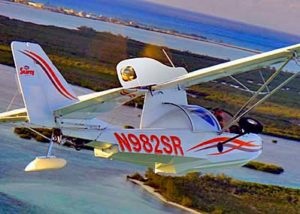 Michael Stock said, “In general, all propellers which are not in-flight adjustable are a compromise between take-off and climb performance (power) and cruise flight (speed, endurance). They cannot work at maximum efficiency in both flight regimes.”

He added, “Propeller thrust for take-off and climb can be up to 30% higher if the propeller blade angle is perfectly adjusted at all times.”

The problem is that FAA, by regulation in place since 2004, only allows a ground-adjustable prop. The agency’s thinking 15 years ago revolved around “safe, simple, easy to fly” intended for all aircraft in the LSA category. That philosophy has not changed; they continue to repeat the line as a guide to their proposed regulation.

However, a ground adjustable prop can be done poorly. Mistakes can be made if the person making the adjustment does not have training or experience.

When LAMA personnel went to Washington DC to advocate on behalf of pilots and producers in the light aircraft sector, we knew the argument could not be that we wanted an in-flight adjustable prop to go faster. The truth is that many LSA can already hit the speed limit enforced by the current regulation. 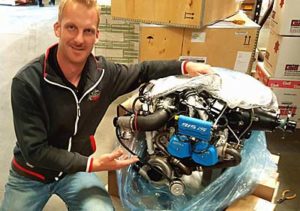 “It’s not about speed; it’s about being able to safely get in or out of a shorter field yet still cruise at whatever speed the airframe was designed to reach,” we told FAA. A personal experience departing the Sun ‘n Fun Paradise City airstrip brought home the safety point. The 1,400-foot grass strip should be more than adequate for a LSA but the particular model (Glasair’s now discontinued Merlin LSA) had been fitted with a cruise prop for the long flight from Washington State to Florida. Since this was a typically heavy prototype, this left the design with insufficient thrust on a shorter turf runway.

To their credit, the FAA executives hearing the argument rather quickly agreed; after all, single lever control does not increase pilot workload therefore maintaining the “safe, simple, easy to fly” baseline. 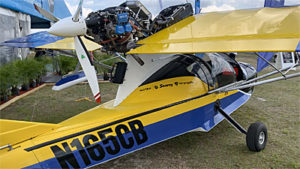 “An in-flight adjustable propeller for LSA should be controlled automatically and not require operation by the pilot,” explained Michael Stock. “An automated blade pitch control system for LSA must provide a 100% fail-safe behavior at all times.”

Fuel injection and ignition of the iS-series of Rotax engines is controlled by a redundant Engine Control Unit (ECU) that uses two individual sets of injectors/spark plugs per cylinder. The ECU controls the fuel-to-air mixture and the ignition timing electronically to optimize fuel consumption and engine performance. The ECU also monitors all engine parameters continuously.

Michael summarizes the positives for the system he has developed and continues to test:

Here’s a video look at RS Aerotech’s Searey with the Rotax 915iS installed.