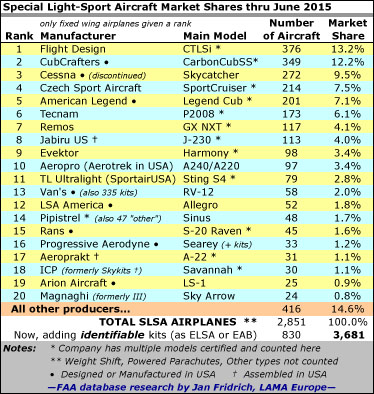 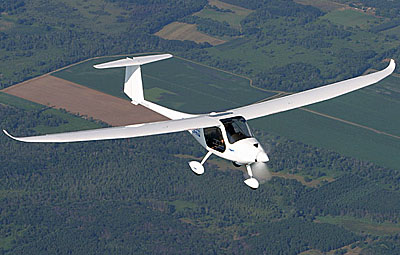 Pipistrel’s long-winged Sinus did quite well during the first half of 2015. 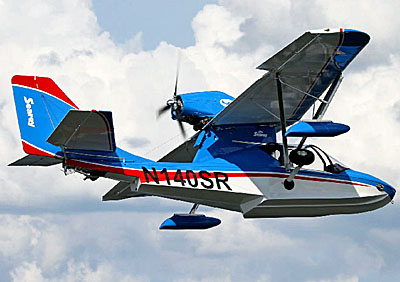 Florida-based Progressive Aerodyne is surging in sales since winning SLSA acceptance. They have also cracked the Chinese market.

The U.S. market for Special Light-Sport Aircraft continues to grow at steady pace, modestly better than the trend for single engine piston certified aircraft as reported by the General Aviation Manufacturers Association for the first half of 2015.

SLSA deliveries in the half-year period totaled 97 units, with 91 of those coming from 15 manufacturers, showing that the famous 80/20 rule still generally applies … more than 80% of the market is supplied by less than 20% of the builders. It also implies the majority of those companies who previously earned FAA acceptance for their LSA models are either quite slow or inactive in the U.S. market.

We’d prefer to describe vigorous growth but the so-named Great Recession seems to be lingering on; at least it appears the much-talked-about recovery has left most of aviation still looking for improved business. Evidence of a still-troubled global economy is even clearer when you consider the wild stock market gyrations of recent weeks.

Even while some sectors and companies continue to struggle, some are more successful. In this first half 2015 LSA market share report, we’ll hit some highlights and save a more detailed analysis for the full 2015 year report early next year.

One LSA businessman asked, “I know some companies out there may be claiming [many sales].” Yet other than Icon — and previously Cessna — I have never heard of any company that claimed to have sold large numbers of airplanes. Most of the more successful producers have moved steadily forward without any big leap in sales.

The laborious research done so faithfully by my friend and LAMA Europe business associate, Jan Fridrich, allows me to report first half 2015 numbers. Jan’s study of FAA’s N-Number registration database shows four companies with decent results. Of course, “decent” is a relative term. If you compare airplane sales — at any level from hang gliders to bizjets — to automobile sales or smartphone deliveries, the numbers look microscopic. Remember, the entire world has somewhere over one million pilots and only one in four of them might own an airplane bought any time in the last quarter to half century. Building airplanes is not a volume business and aircraft production is probably closer to that of exotic supercar manufacturers. One hundred sales in a year is a great performance and very, very few companies hit or exceed that.

Special LSA registrations are running almost identical to 2014’s figures. This can be viewed positively in the sense that it is better than GAMA’s reported 12% decline for the first half of 2015. Regretfully, both sets of numbers show continued softness in aviation, whether general or sport/recreational.

Figures for the LSA industry appear to be about a quarter of GAMA’s Single Engine Piston category that compares most accurately with SLSA registrations. However, as I’ve often observed, the U.S. market is by far the largest for general aviation airplanes where sport and recreational sell better outside the USA. When you consider the rest of the world, LSA or LSA-type aircraft may sell two to three times the number of certified aircraft sold in America. Unfortunately, widely differing national systems make it very difficult to count aircraft in other countries. We prefer to report solid information rather than guesstimates even if it makes the industry look smaller than it is. For a look at global figures see this article and this one, which was updated here.

Our numbers also reflect only fully manufactured LSA as those are the only aircraft we can reliably count when researching FAA’s registration database, regretfully omitting weight shift, powered parachutes, motorgliders, and of course, gyroplanes. Nonetheless, we do have some valid information for ELSA (at least for the most recognizable companies, such as Van’s Aircraft). Adding known ELSA and those Experimental Amateur Built models boosts the total.

In the first half of 2015, CubCrafters remains the strongest seller logging 23 new registrations or about one a week. The western U.S. producer is steadily approaching Flight Design’s once-unassailable #1 spot although Icon is a company that could dramatically alter the market share ranking if they are successful at serial production of their large order book.

Pipistrel registered 17 SLSA in the first half of 2015, which looks to be the second best performance after CubCrafters. The European company also sells a fair number of motorglider types registered differently from SLSA. Indeed 14 of the 17 were their long winged Sinus that offers interchangeable wing extensions (see video).

Progressive Aerodyne has also accelerated smartly since winning FAA acceptance of their SLSA version of their popular Searey that has been quite successful as a kit-built model. The Florida seaplane producer has also cracked the China market and may soon become the number one LSA seller in that country. They’ve already sold a dozen Seareys and have several more orders in the pipeline. If China grows as many anticipate, this American company could move forward quickly, especially in a region where airports remain in short supply.

Other companies that did reasonably well in the first half of 2015 include Jabiru (who also reported good sales at Oshkosh that should show up in our report covering the second half of 2105), Tecnam, SportCruiser, Flight Design, Aerotrek, American Legend (with their powerful Super Legend), Rans (S-7LS), and the lovely Phoenix LSA motorglider.

Postscript — I don’t know how many of you saw AOPA writer Al Marsh’s article, but the following appears to show a fairly rosy future for Light-Sport and Sport Pilot. Of course, as Al notes, FAA cannot see the future better than anyone else. Nonetheless, here’s what he wrote:

“Where is general aviation headed? The truth is, nobody knows, but the FAA is paid to try to predict the future. Earlier this year the FAA released these numbers that are as good as any at predicting the future.”

• I do not know where FAA found this number since their own database shows more than 2,750 SLSA through December 2014 based on a study of the agency’s registration data.