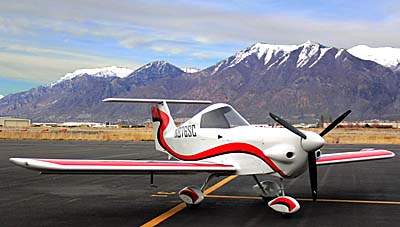 Shown in flight is the SD-1 Minisport. While the U.S. team works through the ASTM standards compliance process we present this photo of the Czech manufacturer’s version. SD-1 Minisport was created by designer Igor Spacek.

We’ve followed SkyCraft’s Minisport in earlier articles and will keep our eye on this handsome, affordable single seat SLSA candidate. It is available in either tricycle gear or taildragger configuration.

“After a long winter and spring dodging the Utah weather,” SkyCraft Airplanes announced that their SD-1 Minisport, “has completed flight testing successfully, meeting all the performance requirements needed for SLSA Certification.” The Orem, Utah company reported, “The plane was found to have good longitudinal and latitudinal stability and exhibited no issues with flutter, vibrations, or dangerous stall/spin tendencies.” SkyCraft representatives said they were able to verify the performance specifications for the SD-1 achieved by its Czech designers (see video below for a performance hint using a European aircraft). SkyCraft said that following the flight test regimen, they posted updated specifications on the Minisport page.

Minisport has been flying in Europe since 2007 when the airplane and company were created by designer Igor Spacek. The U.S. team first contemplated a kit aircraft — SD-1 Minisport is constructed significantly of wood making it a great project for some craftsmen — but later elected to go the fully-built Special LSA route. One part of meeting ASTM’s comprehensive standards set is flight testing. “In addition to ensuring the aircraft’s compliance with ASTM standards,” said SkyCraft’s Director of Marketing Paul Glavin, “the flight test program focused on the pilot experience of flying the SD-1 Minisport.” After completing the series, he added, “Based on flight testing reports, SkyCraft will be updating the interior layout of the aircraft prior to delivery to customers.” The U.S. team preparing Minisport uses the same engine as the Czech group. SD-1 is powered by Hirth’s F-23 engine that produces 50 horsepower and boasts dual ignition, fuel injection, and a 1,000 hour time between overhaul. (Watch our video review of Hirth’s engine line.) SD-1 Minisport is available in either tailwheel or tricycle gear configurations.

“The most significant change will be the elimination of the MGL gauges for a more fully integrated Dynon setup,” observed SkyCraft. “This cleaner instrument panel will make the SD-1 more user-friendly and will also allow the aircraft to take advantage of more of the Dynon glass cockpit capabilities.” Reps noted that they believe this change makes the airplane safer since the Dynon SkyView is backed up with a two-hour emergency power supply. “SkyCraft is committed to delivering a safe, comfortable, and fun flying experience, and we are now fully confident that the SD-1 Minisport provides exactly this,” added Glavin. “Completion of flight testing is a significant achievement in SkyCraft’s ultimate goal of certifying the SD-1 Minisport as a SLSA aircraft. With the performance, design, and production of the SD-1 all ASTM-compliant, SkyCraft is very close to achieving its goal.” We plan to follow SkyCraft closely, partly due to the airplane’s very affordable price at less than $60,000 and because it is a rare single seat entry.

Keeping in mind that what you will be watching is the European version rather than the SkyCraft U.S. version, the following video gives you some idea how well the SD-1 Minisport performs on its 50 horsepower Hirth engine.