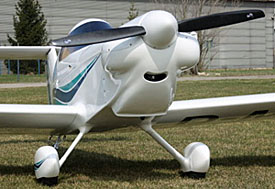 MiniSport’s nose cowl has a masculine appearance many pilots will love. 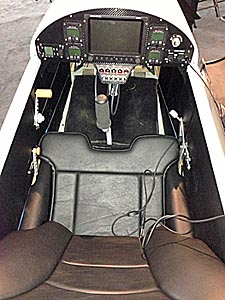 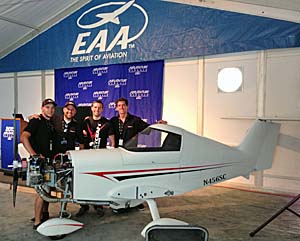 SkyCraft’s team achieved a first (in my mind) by hauling their MiniSport inside EAA’s press center … minus wings, of course.

We looked at this airplane at AirVenture Oshkosh 2012 (video). At that time the Orem, Utah team presented their wood and composite airplane as a kit. In a year a lot changed and now SkyCraft is pushing ahead with plans for a Special LSA that will be delivered fully built for the modest price of $54,850. CEO Tyler Ives says the company is ready to declare compliance to ASTM standards and after they get a chance to prove that to FAA, the SD-1 Minisport might become the very first single seat Special Light-Sport Aircraft, a distinction that once earned will last forever. The only other candidate presently known is the Tecnam Snap aerobatic LSA. Given that Tecnam has achieved more LSA models than any other company, you should never count them out so the race is on to be the first-ever single seat SLSA.

Many have lamented the high cost of LSA. What a number of pilots once thought (in 2004) would be a fleet of $50-60,000 airplanes have turned into a broad mix of 132 models ranging from a low end of $36,000 and $40,000 (yes, really!) to high end models that exceed $150,000, though such higher priced SLSA are commonly loaded with equipment no one anticipated back in ’04. The average, if one could accurately calculate such a thing, is probably around $125,000. Now, let’s be clear. Those ’04 prices stated as $50-60,000 have become $62-74,000 in 2013 thanks to the effects of inflation. So an SLSA costing $54,850 like the Minisport is actually lower priced than many expected nine years ago. Magically reverse the effects of inflation and SD-1 might be priced at around $44,000. Of course, this is fanciful as the SD-1 Minisport only came to market a little over three years ago after seven years in development by Czech Republic designer Igor Spacek. What this time value of money message tries to communicate is that at $54,850 the little SkyCraft airplane is a fine bargain. To date, SkyCraft reports 25 aircraft flying mostly as kits in Europe; four are flying in USA.

SD-1 Minisport is not a bare bones offering and SkyCraft offers some very customer-friendly specials. At the base price you get a dual ignition, fuel injected 50-horsepower Hirth F-23 two-stroke engine with a 1,000 hour TBO, however, the company will perform a free top-end overhaul at 500 hours. Their prop has a 600 hour overhaul point but when those hours are reached, SkyCraft is offering to replace the prop … for free. No doubt these are unusual offers that will help sell more airplanes. Standard equipment is impressive: removable wings that pin the spars in the center section as do many sailplane designs; a Dynon SkyView 7-inch center-mounted digital instrument; a suite of MGL Avionics composed of four small round digital instruments; the new Dynon COM radio that automatically finds frequencies as you near airports; and, a genuine leather interior. SD-1 is day and night approved (the latter for those with a Private or better plus a Medical). Without additional cost you can choose either tri-gear or tailwheel configurations but they do not convert back and forth so choose wisely. The only options are a Mode S transponder, ballistic parachute, or custom trailer with wing racks that can be used for transport or rolling hangarage.

The two-stroke Hirth is very miserly on fuel, burning just 1.8 gallons an hour at cruise which is about 118 mph (102 knots). SkyCraft personnel estimate this translates to $12 per hour of fuel and oil cost. With its 9.7 gallon front-of-instrument panel fuel tank, Minisport boasts a 575 mile range. The lightweight airplane can take off in 220 feet and land in 500 feet. SD-1’s span is tiny, only 19.62 feet and its length is short (under 15 feet) but the airplane is roomy enough to fit a maximum pilot weight of 230 pounds and someone 6 foot 5 inches assuming average body proportions of torso to leg length. Most Americans will fit in the 20.5-inch wide cockpit. Empty weight is listed as 270 pounds with a 310 pound useful load for a gross weight of 580 pounds, which helps explain Minisport’s solid performance on 50 horsepower: climb is 1,400 fpm. For those needing training, SkyCraft has modeled their aircraft in X-Plane to help familiarize new pilots with the panel and general flight characteristics. Later they’ll list on their website a few two-place airplanes which have similar flight qualities. However, team SkyCraft say the little single placer has docile handling that most pilots should grasp in a few hours of flying. At this price and with a generous equipment list, SkyCraft is already selling airplanes.