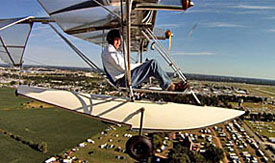 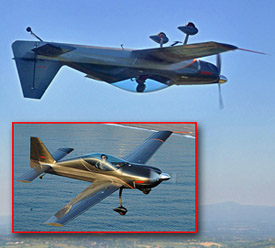 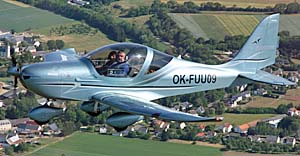 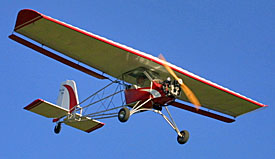 Backyard Flyer is a Part 103 ultralight featuring an electric start four-stroke engine and a one-piece wing that swings 90 degrees for storage or transport. photo courtesy UltralightNews 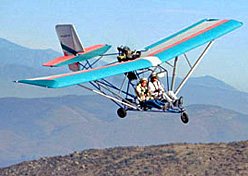 EAA featured the Salute to Quicksilver at AirVenture 2011. The Southern California company has sold 15,000 of these and bagged four more at Oshkosh.

Oshkosh 2011 is history. By numerous accounts, this was a vast improvement over 2010 when the comments commonly went, “Well, I had some interest (in my airplane) and I hope to sell one or two… maybe.” This year I had easily 30 conversations revealing either outright positive successful results or varyingly robust mood indicators such as, “Looks like aviation has life in it again.” I heard from sellers and customers and rarely had to solicit their opinions. *** A number of aircraft purveyors said they took cash deposits and wrote firm contracts. I estimate about 30 aircraft sales by this method. Companies like Icon, Flight Design, and Terrafugia sold a large number of future delivery positions (more than 50, more than 60, and “several,” respectively). *** Icon neared or crossed the 500-on-order point, partly by “testing elasticity” in the pre-order market by lowering the A5 seaplane deposit to $2,000 from $5,000. *** Flight Design continued their tear from Aero adding dozens more orders for their four-seat C4, reporting more than $16 million in orders. These two and the roadable car maker continue to capture generous media attention and to present their stories impressively. *** Companies reporting sales for near-term delivery include Jabiru USA, Arion, Czech Sport, Evektor, Quicksilver, and Corbi, each logging from 2 to 7 sales. Arion transacted both SLSA and Experimental orders of their gorgeous LS-1. The preceding list is not inclusive as I didn’t hear from a number of companies regarding their results. *** Demo ride pilots also stayed very busy. Phoenix USA did more than 20, all out of lovely little Brennand Airport, 15 miles north of Oshkosh. SeaRey designer Kerry Richter reported 35 seaplane demos at EAA’s Seaplane Base. Pipistrel ran steadily, also at Brennand, except when they helped UltralightNews and me as we performed our first “full length” video, two-person pilot report on the new Evektor Harmony LSA (in two words: sophisticated & sweet). *** On the industry side, LAMA and GAMA (GA Mfrs Assoc.) held the first of a series of LSA leadership meetings. From last year at AirVenture the change in support for LSA at the highest levels of aviation was dramatic. Last year we remained somewhat ugly cousins deserving only an arm’s-length embrace. This year it was more a clap-on-the-back, glad-to-have-you-in-the-club greeting… though, of course, professionally delivered as these are the Big Boys of aviation. LAMA gave its 20th President’s Award to Cessna’s former president Jack Pelton, who reiterated his strong support for the LSA concept and promised to carry pro-industry messages when he meets this week as part of small, select group that advises FAA boss Randy Babbitt. Most of the conversation is likely to involve FAA’s current budget problems but the LSA sector represents good news for the agency. *** Visitors saw several new LSA at the show (Snap, electric Lazair, Harmony LSA, tri-gear Kolb Mk III, Remos NXT, and four seaters from LSA producers: Flight Design C4 and Tecnam P2010). Again, this list is not exhaustive and we’ll have more on these and other unveilings in coming days. *** True-103 ultralights flying with electric motors continued to draw big crowds in the Ultralight Area, which I thought looked stronger than in recent years. We also found and shot video reviews of interesting machines in the Ultralight Area: Kolb’s Mk III tri-gear/taildragger (yes, it goes both ways… at the same time!); the Part 103 welded-aluminum, swing-wing Backyard Flyer; the return of Terry Raber’s $14,000 ready-to-fly Aerolite-103; Earthstar’s all-electric eGull; plus a review of all the Hirth engines and an updated video on the Quad City Challenger. In the weeks ahead, we expect to post more than dozen fresh videos. *** Finally, ByDanJohnson.com enlisted several new sponsors to help us keep bringing you all the news of light aviation, nearly all of it free thanks to these supporters and the support of all our members. This year’s Oshkosh made me very happy to remain in this where-the-action-is industry. Lots more to come… click back soon!