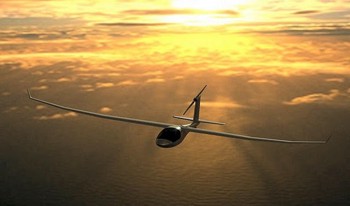 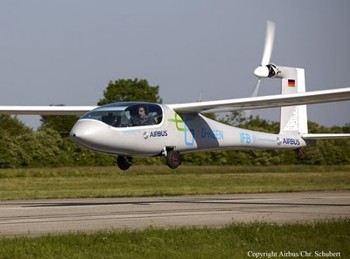 Updates 10/4/11 and 10/5/11 — Congratulations to Pipistrel for their unprecedented third win at a NASA Challenge. Picking up a cool $1.35 million, the company won with their unorthodox dual Taurus G2 fuselages joined by a larger, centrally-mounted electric engine. The custom-configured, four-seat aircraft achieved an amazing 403 passenger miles per gallon of fuel (or its equivalent). After this string of wins, Pipistrel has firmly placed itself in the lead position among highly efficient light aircraft and those powered with electric motors. *** NASA claims the prize purse was the biggest ever awarded for an aviation competition. In second-place a much smaller but still hefty check for $120,000 went to the German eGenius team, NASA announced. *** Read more from our friends at AvWeb and at Flying online. In addition, Aero-News offers a video with more on the potential of electric power (scroll to or search for “The Green Flight Challenge”). —DJ

The CAFE Green Flight Challenge is at last underway — it was originally planned for mid-July — and as of the end of today’s flying, just three of the original 13 entrants are still qualified to keep going for the $1.65 million prize money. *** The event, centered in Santa Rosa, California (between Los Angeles and San Francisco), is sponsored by Google and is seeking to advance public awareness and the technologies of electric and high-efficiency flight. Electric-driven aircraft have garnered most of the advance press, though most of the electric entrants have either been eliminated or couldn’t get their aircraft ready in time.It’s a pretty simple task: fly 200 miles averaging 100 mph or greater… with one teeny tiny hitch: fuel burn or fuel equivalent use (electric or electric/hybrid) can only be one gallon of fuel. That’s right: one (1) gallon. Put another way, that’s 200 mpg. Daunting, to say the least. *** Every task day there are different challenges to test the full mettle of each aircraft and pilot, such as a strictly economy run, a maximum decibel test, then the final speed/economy run on the last day. *** One entry, the Eco-Eagle, in the works for 2 years from Embry-Riddle Aviation University, was just disqualified because the race rules specify a two-place airplane must fly with two people, not just a pilot and an equivalent copilot weight in the other seat. But Embry-Riddle’s rules specify only one ERAU participant can fly in a competition event. The Eco-Eagle also did not have a fully functioning airframe parachute system, although one was aboard, and that violated another CAFE requirement. *** The officials, with full consent of the other competitors, will allow the aircraft to fly in the race as a demonstration aircraft, and although it’s not eligible for an award, it will be interesting to see how it fares against the others. *** Gotta say, somebody didn’t do their homework. Those poor kids at Embry Riddle worked for two years and nobody figured out they wouldn’t be legal because of a basic rule: flying with all seats filled? Hard to figure that one, but kudos to the team and the competitors for encouraging the ERAU team to be part of the event: they’ve certainly earned it. The aircraft was performing very well in practice runs according to varied reports from the field. *** In a bit of a surprise, old friend Jim Lee in the Rotax-powered Phoenix USA is one of the three remaining competitors (along with Pipistrel‘s Taurus G4 and Germany’s e-Genius)! Jim’s a master at squeezing every last bit of performance out of whatever he flies (as I’ve written before, he held the distance hang glider record for years back in the ’80s and is an accomplished sailplane pilot). And he really loves nibbling the thermal potential in his elegant, high tech Phoenix motorglider, for which he’s also the U.S. distributor. *** Ah, my misspent youth: if only I could afford one… or a Pipistrel Vinus or Sinus… or Eric Raymond’s Sunseeker… alright kid, snap out of it. *** I don’t know yet what happened to the electric version, the PhoEnix, other than it couldn’t be made ready for race date in time or perhaps wasn’t performing up to expectations. *** Many people are reporting that it’s the electric version that’s flying, but Jim’s comments in the video below would seem to put the kibosh on that. Too bad PhoEnix is out, it was a promising entry… but also kind of cool that a gas-powered motorglider is even in the finals. Good hunting Jimbo! *** Having the stock 100 hp Rotax-powered Phoenix in the final running should be a great PR boost too for what is already the sweetheart motorglider of the LSA genre. Motorgliders are gaining more attention from pilots who want more than point A to point B flying on their plates. *** One of the other two remaining entrants is the Pipistrel Taurus G4 (this link goes to Pipistrel’s Michael Coates’s gallery of GFC photos, worthy of a look). The G4 is in essence a purpose-built joining of two Taurus G2 electric motorglider fuselages onto a larger wing with an electric powered motor-only pod at wing center — a wild jump of ingenuity because being able to carry four passengers, two in each pod, (which CAFE rules require them to do) does qualify the aircraft to carry the equivalent of four gallons of gasoline in electric power storage capacity — one gallon per person is the rule, for 200 miles at 100 mph. The G4 may turn out to be a winning strategy, if the economy is there.The final entrant is e-Genius, built by University of Stuttgart aeronautical engineers and students and a formidable entry in its own right. *** Today’s event required all entrants to meet the noise level ceiling of 78 dBA during full-power takeoff, as measured from 250 feet away. All three (four counting the non prize- qualified Eco-Eagle) met the challenge.