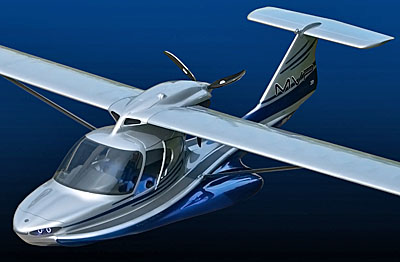 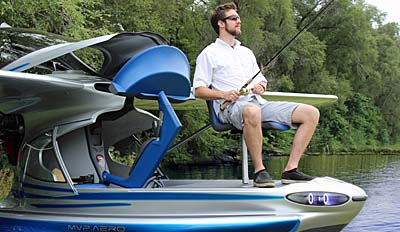 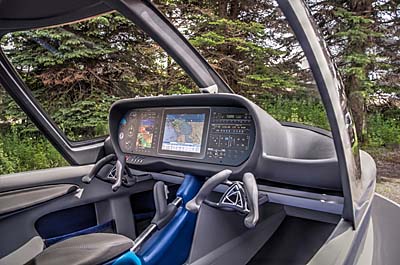 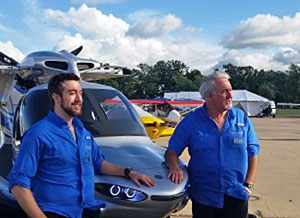 With training in software and a background as an entrepreneur, MVP.aero president Darrell Lynds (R) also had years of experience with the Searey LSA amphibian. Son Mike Lynds is an A&P and accomplished builder handling digital marketing.

In the first decade of Light-Sport Aircraft we saw a new model emerge nearly every month; some months brought more than one model. SLSA approvals reached 136 aircraft, most of them land-based aircraft (our SLSA list describes each type).

To general aviation pilots used to a genuinely new aircraft model once a decade or so, this LSA development outpouring was phenomenal. Cirrus SR20 was certified 17 years ago in 1998; how many other all-new GA models can you name since?

By 2015, the torrid pace has slowed for various reasons and now we see more incremental changes on Light-Sport Aircraft, by which I mean new engines, interior changes, new avionics or other features, and so forth. This is much like in the GA world and I see nothing wrong with that, but it is less inspiring than a constant flow of brand-new concepts.

Rushing into this all-new-design gap like a tsunami filling a Pacific atoll are LSA seaplanes. Most storied among them is the A5 but Icon Aircraft has competitors hot on their tail. One of the most versatile of these is MVP, in fact, “Versatile” is literally its middle name.

Since seeing is believing, we have two solutions for you. One is that MVP is going on tour. The progressive company is going to Boeing Field in Seattle over April 24 and 25, 2015 and to the Palo Alto airport in Silicon Valley May 1 & 2. The company is also traveling across the Atlantic.

MVP.aero (yep, that’s the company name) built a static mockup display that is a full size replica of the MVP Model 3 aircraft. “Many of the mockup hull parts and interior cockpit parts are made from the same molds as the upcoming flying prototype,” said company officials. They say — and our video shows — the mockup gives you a very close feel as to the dimensions of the aircraft, its cockpit, and the seating. Even the side catwalks — which can be used to move from cockpit to engine or tail while powered down on the water — are functional.

“You are welcome to come and hear about MVP,” said MVP.aero. European pilots traveling to Aero Friedrichshafen in Germany can look for MVP representatives in the exhibit building’s Foyer East entry hall, space 03B over April 15-18, 2015. [Update March 30] At Aero, the company will have video and information but they are not shipping their mockup.

MVP is a feature laden aircraft, yet many readers may wonder how that’s possible given that Icon went to FAA seeking additional weight so they could deliver all the desirable qualities airshow visitors saw on their mockups. How does MVP.aero handle the same matter?

“Putting more features (and weight) on an already weight-restricted airplane literally required a paradigm shift from traditional thinking,” said MVP.aero. “This different approach is the key to understanding how we are going to achieve the goals set for the MVP.” As observed by company design engineer Mike Van Staagen — the same man who led the Cirrus Vision jet development for several years — “MVP is not an amphibious airplane that has a number of new features added to it. Instead, it is a highly integrated collection of features, pieces, and parts that [join] to become an airplane.” Mike’s work with the earlier Cirrus SR-series and later the single engine jet project gave him a strong background in doing things differently.

Van Staagen is backed by an impressive team that company founder Darrell Lynds carefully recruited over the recent years. This brain trust put much thought into their MVP.

According to company reps, “MVP’s most compelling feature is that it transforms into a versatile floating platform.” The canopy hinges up and back freeing the nose of the MVP to resemble the front of a familiar bass fishing boat. The design is clever though; even with the canopy open MVP’s engine can operate so as to continue to shore, dock, or the next fishing spot. In the canopy-retracted configuration a passenger can step up onto the forward deck to assist in docking or beaching.

MVP’s Instrument panel also retracts to allow more maneuvering room and to protect avionics from water damage. Four folding panels that MVP.aero calls the “origami deck” can be deployed in two halves to fully cover the seats of the cockpit, enabling a completely flat floor from the bow to the back of the baggage compartment. “This amazingly big surface on a relatively little airplane is large enough for two people to stretch out and sleep,” said Lynds. “Deploying a custom-fitted tent and inflating air mattresses makes spending the night a delight.”

MVP’s on-the-water manually folding wings are another interesting design creation. “Taxi up close to the marina, shut down the engine, fold the wings, and propel MVP towards a slip using an on-board trolling motor,” suggests MVP.aero. “Integrated within the bilge is a useful bow thruster to help make docking a breeze.”

Flanking both sides of the MVP are nose-to-tail catwalks that enable movement around the MVP. Done on the water to preflight the engine or inspect the tail and wing control surfaces, MVP.aero said the design is stable enough that both occupants can be on one side without upsetting the seaplane.

The airplane has such unusual features, I recommend this brand-new video to see more: