Sun ‘n Fun does it. EAA AirVenture Oshkosh did it. Why not the smaller, sector-specific shows? Indeed, why not? I refer to reporting of show statistics when the event concludes. In modern vernacular, these are “metrics.” 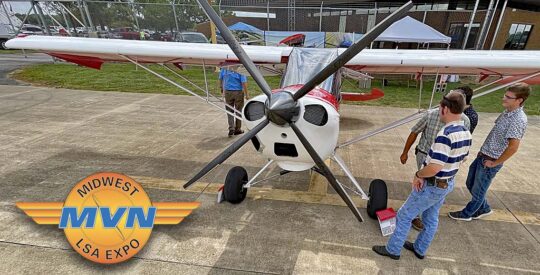 Appearing in this view to be all-engine, Zlin’s Norden gave several demo flights through the three-day Midwest LSA Expo. The popular “Cubalike” is represented by LSA veteran Bill Canino of SportairUSA.

The likable and longtime manager of the Mt. Vernon, Illinois municipal airport, Chris Collins, has been forwarding some “metrics” from this year’s 14th annual event. Whatever you choose to call the numbers from an event, they provide useful information on how the show performed.

One comment measurement is the number of airplanes sold or the quantity of interested pilots who expressed real interest. Trying to get hard information is like nailing Jello to a wall. We get tidbits and potential but hard facts are hard to assemble. A genuinely interested person ready to make a deal could experience problems right after the event. Some (understandably) need to check with their spouse; that sometimes alters a decision.

Tri-State Kites — maker of the derivative Smithsilver series of very light aircraft — brought a sizable flock to the event as they often do (their base is not far away). They offer many variations and business is “very good, almost too good” right now, said Andy Alldredge.

Still, people like Chris and myself ask the vendors how they are doing. It’s quicker and easier than trying to poll every pilot, plus the vendors have perspective from earlier versions of this show or other aviation trade events.

My guesstimate is that at least ten airplanes were sold as determined by cash changing hands. That’s not appreciably more or less than other Midwest LSA Expos, but this year two data points stand out: (1) sellers reporting many good contacts — virtually every exhibitor agreed —  and (2) the large number of demo flights. 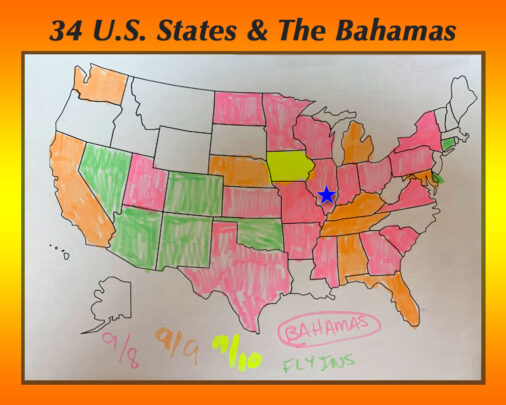 Most vendors appeared to conduct numerous demo flights for interested pilots. I often saw multiple airplanes at any one time preparing to get a new aviator in the seat for a flight. The surrounding area is wide-open and the weather simply invited more flying, every day of the event. (Rain finally did come but not until the end of the final day.)

One extra treat was a good gathering of KR kit builders as they celebrate the 50th anniversary of this well-established design (nearby image).

“We just completed our wrap up meeting this morning,” reported airport manager, Chris. “We celebrated many highs and noted a few lows. There is always room for improvement.” 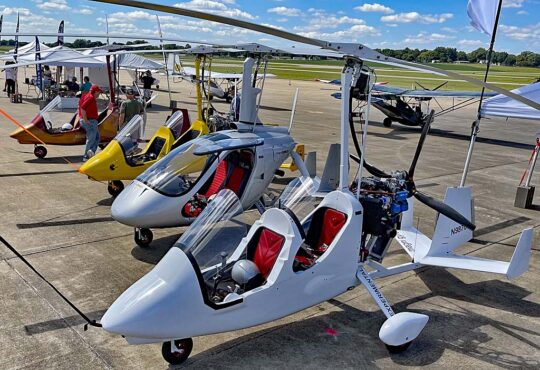 Magni USA representative Greg Gremminger was present as he always is for the Midwest LSA Expo. This year, he had several Magni models for visit pilots to examine. As usual, he gave seminars and demo flights to interested pilots. Gyroplanes remain a more affordable sector within light aviation.

As for metrics, Chris noted,  “Visitors from 34 U.S. States attended (map). One gentleman [came] from The Bahamas.”

“We parked 107 itinerant aircraft,” Chris continued. “We had 30 RV spots (with hook-ups to the power grid). Numerous people (including five at their aircraft) camped in tents. Our on-field restaurant (centrally located in the Koziara Terminal) was busy from dawn to well past dusk all three days.”

“The most important metric may be the amount of demo rides given,” Chris acknowledged. “I don’t have official records for this, but as one of the primary air traffic safety monitors I can attest several exhibitors were in the air at least six times each day.  When the exhibitors are conducting demo flights, the Expo is doing what it is designed/supposed to do.  Of course, mother nature has a lot to do with this year’s success as the Expo was blessed with 2.5 days of near perfect flying conditions.”

Chris defined a goal: “The core foundational elements will always be unrestricted demo flights and exhibitor/attendee interaction. We always look forward to taking care of all visitors at Midwest LSA Expo. As was done this year, I am sure we will have a few more ‘freebies’ for everyone in 2023.”

Celebrating the 50th anniversary of the Rand KR series of Kitplanes, a group met at Midwest as they’ve done before, hosting forums and builder assist sessions.

I again caught up with Chris as he and his wife Tricia were on their way to the Illinois Public Airport Aviation Conference in Galena, Illinois up in the northwest corner of this geographically long U.S. state.

“Late this week, I discovered another positive metric about this year’s Expo,” reported Chris. “We sold 600 gallons of mogas at Expo 2022. That’s nearly double our normal sales volume. Now, 600 gallons isn’t a large number when it comes to fuel sales at an airport,” Chris added (a few private jets can buy that much), “but it is significant when providing 6-8 gallons per fueling.” 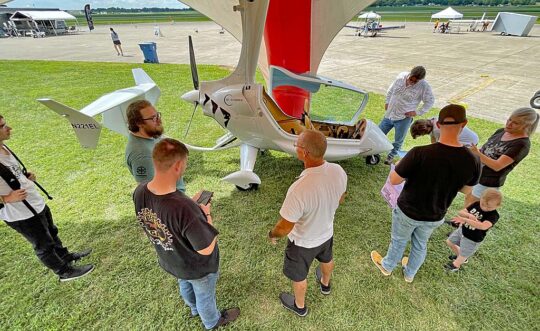 One of the beauties of LSA, Sport Pilot kits, and ultralights is how little fuel they use but that is not a big plus for a major metro airport used to selling thousands of gallons of go-juice per month. Yet Chris and his team act like they’re servicing a biz jet with their prompt service by fuel truck to onboard a few gallons per airplane.

Another metric came compliments of flight-tracking website, FlightAware.com. “That site recorded nearly 40% increase on their arrival/departures data when compared to 2021,” Chris explained.

“The weekend after the Expo, a group of us visited Tri-State Kites,” said Chris. “We ran into several people from across the country that attended both events. Proprietor Andy Alldredge told me he distributed over 150 business cards to interested people at Midwest!” That might not be a big quantity compared to Oshkosh, but at Midwest, vendors generally speak to pilots that are highly interested. With no airshow or warbirds or movie stars, attendees at Mt. Vernon are interested in the aircraft present. Simply, if they come, they’re interested.

After our exchange, Chris ended with… “This is so fun!” If you know Chris, you can probably visualize the smile on his face as he said that. It makes me smile, too.

See you at Midwest LSA Expo 2023 — the 15th year of the event, when it will tie the Sebring Expo as the longest-running of these sector-specific shows.