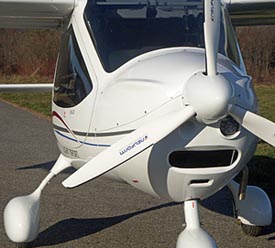 Cowling “eyebrows” are one clue to the new fuel-injected engine underneath. 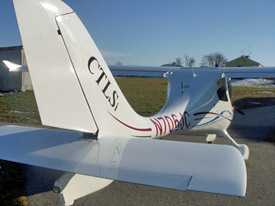 On the tail, a little “i” also helps identify the Rotax 912 iS powerplant. Read our FAQs about the new engine. 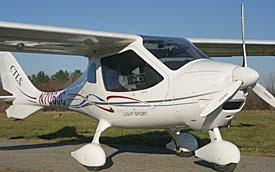 Flight Design’s popular CTLSi is ready to fly for 2013. 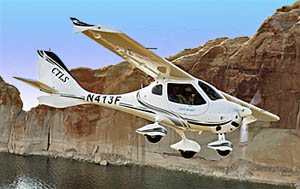 While Flight Design was busy with CTLSi changes, they also took time to celebrate their 25th birthday with this handsome black & silver limited edition “Jubilee” model.

The first iLSA are flying in the USA. Springboarding from Apple’s famous iDevices, why not iLSA? This stands for “i” Light-Sport Aircraft, meaning they’re fuel injected, which today suggests Rotax’s new 912 iS engine. Tecnam has announced P2008s with the new powerplant. Pipistrel has iS models, too. Others will follow, although Remos indicated they are taking a wait-and-see approach to the new powerplant. All models remain available with the carbureted version of the 912s in 80 or 100 horsepower. (See this earlier article about the newest Rotax and this one with a video.)

Market leader Flight Design has iLSA arriving in all corners of the country under the slightly changed name of CTLSi. Flight Design USA president Tom Peghiny recently assembled a couple of these airplanes and logged several flights on them. He offered a series of comments on how his newest LSA is an improvement in last year’s model.

Most often reported is reduced fuel use. Tom wrote, “CTLSi has improved fuel economy, reduced carbon emissions, and does not require leaded fuel. The Rotax 912 iS engine operates with standard auto fuel up to 10% Ethanol.” He added that the powerplant is an attractive modern engine installation that allows for simpler operation and lower maintenance; mechanics will no longer need to sync two carburetors. Though the 912 engine has changed considerably, it retains the 2,000-hour overhaul time and Flight Design boosted their warranty on both airframe and engine. In the nose-on photo, you can see two small “strakes” that give the cowling a gutsy appearance. According to Flight Design’s John Doman, “The ‘eyebrows’ on the cowling provide clearance for the fuel injection rails.” Those nose cowl alterations and a little “i” on the tail behind “CTLS” are all you see from the outside. Under the cowling, more changes await close inspection.

Tom Peghiny continued, “Extra alternator output supports increased electrical systems on our new CTLSi and works in conjunction with a lithium-ion main battery.” He noted, “The upgraded model has a new header tank with an additional 1.7 gallons of fuel, a low fuel warning light, and even moreso than before, CTLSi offers super long range flights.” Besides simpler operation, Tom said, “CTLSi has a highly redundant installation with a Rotax-supplied fuel pump system that works very well with Dynon’s Engine Monitoring System and special EMS modules.” A new fuel selector now provides a graphic indicator on SkyView multi-function display. Yet the CTLSi changes are not all engine and fuel system related.

A new electric trim control features a graphic indicator on the SkyView MFD; Dynon’s SkyView sythetic vision now offers an ADS-B option for 2013. Whelen lights were added for 2013; audio alarms are increased on SkyView in a “pleasant voice,” Tom said. He went on, “Three GPS systems are on board including three synthetic vision systems; a redundant air data, attitude, and heading reference system (shorthand: ‘ADAHRS’) with battery backup.” The last reference means CTLSi can lose all electrical generation and still fly with battery back up. The Garmin 796 can be used as touchscreen navigation device complimented by XM weather and music with info about TFRs and other flight impediments. The whole system offers seamless integration with the Dynon autopilot for navigation, greatly relieving pilot workload. Finally CTLSi offers 100% LED lighting including landing light and a 12-volt plug for an iPad or other mobile devices. Apple fans even have an input for their iPod. In short, Tom finishes, “This is not your father’s LSA!”