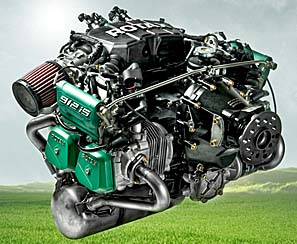 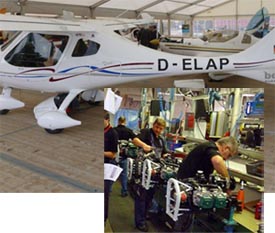 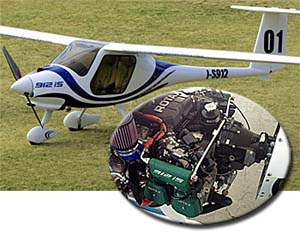 Pipistrel was ready with the environmentally-friendly engine. photo courtesy Pipistrel

In a product launch somewhat comparable to an Apple Inc., product event, BRP Rotax drew a large group of attendees to their facility in Gunskirchen, Austria.

The occasion was the launch of their new 912 iS engine. In the tech world, “i” means Internet. In the light aviation world, or more specifically BRP Rotax’s world, “i” now means injected. *** “Pilots will appreciate the easier pre-flight check and starting procedures offering them an enhanced flight experience,” stated Rotax/BRP. They add that this removes “the need for servicing and synchronizing the carburetors every 200 hours.” Fuel injection also “eliminates” carburetor icing. Users of the engine will appreciate these improvements. *** Fuel injection is controlled by an Electronic Control Unit (ECU) similar to automotive applications. A mechanic can connect to the ECU with a laptop for easier maintenance. Rotax engineers employ the ECU to time and configure each fuel input. All cylinders also use two fuel injectors per cylinder for redundancy much like dual spark plugs on carbureted aircraft engines. *** Rotax-Owner.com, a Canadian enterprise assisting owners and mechanics of the popular engine, attended the launch event and reported, “Rotax, a company always known for cutting edge innovation and technology, really hit the ball out of the park today with the introduction of their new 912 iS 100 HP fuel injected engine.” *** A look at the engine parts on their new special 912 iS website shows Rotax is thinking green. The Austrian producer is positioning the 912 iS to be an environmentally-friendly engine thanks to improved fuel economy and with lower emissions as major elements of the design. |||| More 912 iS engine facts — The new 912 iS engine maintains the same output (100 horsepower) as do current carbureted versions of the 912. However, they scrapped the Bing carburetors that demanded periodic adjustment. The company claims up to 30 percent lower fuel consumption than competing aircraft engines providing the same power. *** Physically, the 912 iS remain essentially the same size as earlier 912 engines. However, weight increases about 13 pounds, totaling about 140 pounds installed weight before fluids. The engine has an external alternator to power both the ECU and aircraft systems. *** BRP reported that the engine can be ordered in two versions: one non-certified plus the 912 iSc for certified aircraft. The company says production will begin this month and the 912 iS features the same 2,000-hour time between overhauls (TBO) as their present 912 engines. For those concerned, the 912 iS can use premium autogas up to E10. *** If you seek even more detail including technical descriptions, you can download their 912 iS PDF brochure. In this document, readers can see charts comparing the new powerplant to existing engines used to power Light-Sport Aircraft. If that’s still not enough, make your way to the LAMA LSA Mall right inside the entrance to Sun ‘n Fun 2012 where the company will host a large display staffed with experts who can help explain the new development. Power up and head to Florida!