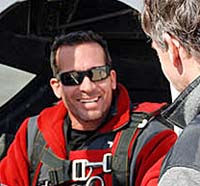 Icon Aircraft founder and CEO, Kirk Hawkins enjoys an early flight in the company’s A5.

An artist’s view of the soon-to-be Icon Aircraft factory in Vacaville, California. Read my 2009 view of Icon’s concept here

Vacaville is about 50 miles northeast of San Francisco and near Napa’s vineyards, the state capitol of Sacramento, and Travis Air Force base.

I have been following Icon Aircraft closely since I first met top gun Kirk Hawkins on the EAA Sport Pilot Tour back in 2005. Then he was one man with a business card and a dream. In the nine years following, Icon has become, well … an icon of light aviation. Almost everybody knows this (yes, I’ll write it) iconic company and their eye-catching A5 LSA seaplane. The southern California company reports more than 1,000 people have put down deposits. The first in line have been waiting quite some time to hear when their airplane will be built and now the company confirmed what we’ve reported earlier: they selected Vacaville, California to be their main production location — although component production will occur under the watchful eyes of successful GA builder, Cirrus Design, way up in North Dakota.

“After several years and an extensive nationwide search, I’m excited to announce that Vacaville and Solano County will be the new home of Icon Aircraft, Inc.,” reported CEO Hawkins. He added that the new location is adjacent to the Nut Tree Airport in Vacaville and will serve as combined facilities for aircraft design, manufacturing, sales, flight training, and corporate headquarters. Kirk continued, “Icon chose Vacaville because of the business-friendly local government, accessibility to a talented labor pool, existing facilities adjacent to the airport, and the region’s outstanding weather and environment for year ’round flight operations and training. The site also allows easy access to compelling recreation destinations, including the San Francisco Bay Area, Wine Country, and Sacramento for visiting customers as well as employees.”

Usually, when decisions weighed this carefully are announced, parties take care to spell out what this means for the chosen location and Icon has done similarly. “The annual economic impact on Vacaville and Solano County is estimated to exceed $350 million through wages paid, local purchases made by Icon, and increases in employee and visitor spending, as well as sales and property tax revenues to the city and county once the company is at full production rates.” The company reported that customers will tour the factory, take delivery of their aircraft, and complete their flight training in Vacaville, approximately fifty miles northeast of San Francisco. Beginning in the first quarter of 2015, the company reported that it will begin operating in a 140,000-square-foot facility. The community is very happy about being chosen. “To say we’re pleased with Icon’s selection of Vacaville would be an understatement,” said Vacaville Mayor Steve Hardy. “This seems like a natural fit to us [and] we look forward to a long, mutually beneficial relationship.” Icon plans to manufacture production aircraft at its existing facility in Southern California before transitioning to the facility in Vacaville. The first customer aircraft is scheduled to be completed in early 2015, the company said.