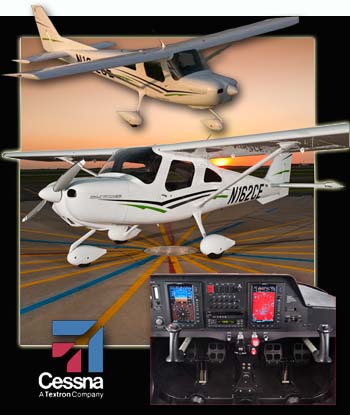 Follow the leader? As Cessna enters full production in 2010 and beyond, the brand is likely to rise to the top of market share chart, given they have more than 1,000 on order. “Once these airplanes enter service, they will act as a catalyst for increased pilot starts,” said Cessna boss Jack Pelton. Photo — Final version with dual screen G300 avionics suite.

Through the years of design development, few expected Cessna would delay their release of the Skycatcher. Any naysayers were wrong. *** At several meetings with Cessna leaders at Oshkosh 2009, I consistently heard that a small number of Skycatchers would be built in 2009, which means the big producer is right on schedule. Even with the global aviation turmoil that also engulfed the company (employment is off more than 50% at present), Cessna is staying the course with their LSA entry. *** Notably, Skycatcher serial number one will go to Rose Pelton, the charming wife of Cessna President, CEO, and Chairman, Jack Pelton. As LAMA founder Larry Burke and I visited with Rose during AirVenture, she expressed great enthusiasm about pursuing her Sport Pilot certificate once the new bird arrives. *** Top management persons such as Piston Aircraft VP, John Doman, and Communications VP, Bob Stangerone, have recently had a chance to fly the new Light-Sport Aircraft from Cessna. “You can fly feet on the floor even during a full power takeoff,” exclaimed Bob, effectively setting to rest any doubts some may have harbored about tail volume and earlier spin trials. *** A handful of Skycatchers will be built by Shenyang Aircraft in China (under watchful eyes of Cessna engineers) and delivered to Wichita for final assembly. Additional locations will be used for assembly as production grows; the company has more than 1,000 orders so 2010 should be a solid year to observe the company’s progress. Shenyang will fabricate the fuselage and integrate the engine and avionics from the U.S.