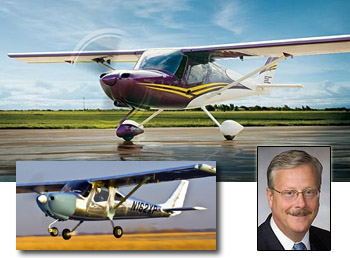 Cessna CEO (and LAMA board member) Jack Pelton was named winner of the 2008 Aviation Week Laurel for Business and General Aviation. Notably, the international magazine referred to Cessna’s LSA when making the award, “Jack Pelton has pushed Cessna to develop, refine, and deliver aircraft across its full line [including] the Skycatcher trainer…”

A Russian business aviation website released early news of Cessna making their first Skycatcher flight in Wichita, Kansas. LSA news spans the globe…when it’s about Cessna. *** Jets.RU correspondent Paul Richfield wrote, “Cessna’s 162 Skycatcher prototype flew for the first time on March 8 with test pilot Dale Bleakney at the controls. The one-hour mission included flight maneuvers to assess the stability and controllability of the new design.” Big deal, you say? We have 75 approved SLSA models; they all took a first flight and you heard about few, if any, such flights. True, but none of them was Cessna. Even if the aircraft may appear unremarkable to you, LSA market entry by the $5 billion a year aircraft manufacturer is remarkable. *** The prototype Skycatcher is the first of three airframes to be built in Wichita, Cessna said. Next will be their “first production model,” while a third is slated to be an engineering test article to meet ASTM standards. All Skycatcher engineering and test work will be done in Wichita. *** An intriguing part of the news was that “a final decision on powerplant selection is pending.” UPDATE — Cessna Director of Corporate Communications, Doug Oliver, read this post and clarified their meaning, “Our recent release on the first flight of the Skycatcher prototype may have been a bit misleading when it said we continue to evaluate the Continental engine. We mean only that we continue to gather data. We have selected the Continental engine for the Skycatcher…and we remain committed to Continental.”