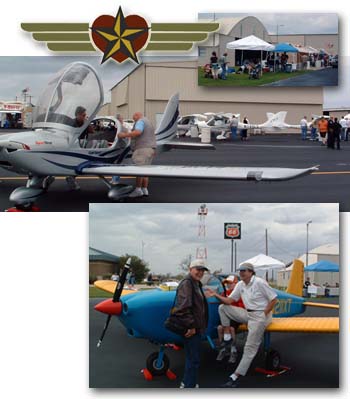 In the foreground, IndUS Aviation‘s Scott Severen speaks to a customer while the middle photo shows Evektor‘s Barry Pruit describing features of the SportStar in front of a trio of Flight Design CTs.Organizers provided overnight hangars for exhibitor LSA. Photos by Chuck Morrow

Exhibitor Chris Regis of Paradise USA (representing the P-1) reported “good visitor traffic” and “excellent organization” from the people behind the Heart of Texas LSA Expo. The new event, held over March 8 & 9 is one of two planned shows following the strong 2009 performance at the pioneer of LSA Expos, the Sebring U.S. Sport Aviation Expo. *** Several reports reminded me of the 13-city Sport Pilot Tour held during 2005 and 2006. Each of those events drew 10-20 exhibiting LSA and attracted 300-700 people at locations across the USA. The numbers sound small to those enamored of the huge crowds at Oshkosh. But, in fact, the Sport Pilot Tour, with its focused marketing on LSA only, helped customers find the manufacturer they were seeking. Everyone who came was interested in LSA and a vendor could speak to nearly all of them. In contrast, even if you are very active, it’s physically impossible to speak to even half of 1% of those attending Oshkosh. *** Though strong winds on Saturday likely kept some pilots from flying in, “more than 200 cars in the parking lot” brought reasonable crowds for a first-year show. Airplane reps were busy with demo flights on Sunday. In addition to those shown in the photos, exhibitors included: American Legend, North Wing (weight shift trikes), Paradise, Gobosh,
Sportair (Sting), Jabiru, Urban Air, RANS (S-7 & S-19), and AirBorne.