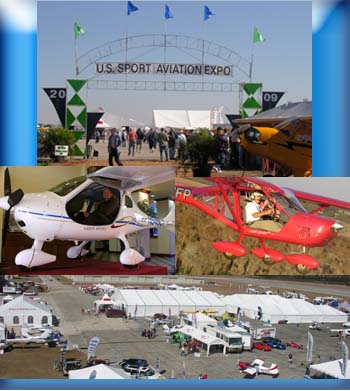 The closest hotel to Sebring Expo is the Four Points Sheraton, which added a new wing last year. During the event every single room was in use by a LSA exhibitor or attendee. Modeling the CTLS on display in the entry lobby (center, left) is Reinhard Haubner, the hotel’s general manager.

I’m still contemplating the major success of the Fifth Annual Sebring Expo, which shrugged off the doldrums of 2008. Let’s review: AOPA is the leading pilot organization in the world. Their flagship magazine, Pilot, has by far the largest circulation of any magazine in aviation. Their Expo is long established. *** Yet it appears January’s Sebring outdrew November’s AOPA Expo in San Jose, California. Sebring attendance may have reached 11,500 while Expo reported 9,500. Both are excellent shows for exhibitors as each precisely targets their market. Despite AOPA’s vastly larger size, professional staff, and years of experience, LSA are evidently a compelling enough attraction that Sebring Expo passed AOPA Expo. *** After all the tallying is done, I would not be surprised to hear 20 airplanes sold at the show (worth approximately $2.5 million). AOPA’s Expo may have transacted more revenue for exhibitors as GA prices are higher, but Sebring can be proud. Every exhibitor I spoke to will return for Sebring #6 in 2010. *** Following on this success — and enjoying advice from the Sebring organizers — are two more announced LSA shows. The HOT (Heart of Texas) LSA Show is slated for March in Bryan, Texas and the Midwest LSA Show will follow in October in Mt. Vernon, Illinois. [UPDATE Jan. 30, 2009 — The GA Industry Reports on Sebring: An AOPA online posting + video or a Plane & Pilot blog or AvWeb’s blog.]