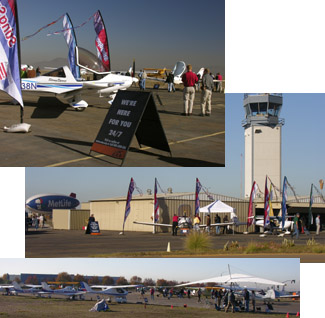 EAA’s Sport Pilot Tour ran its last presently scheduled event at Brown Field in San Diego, California on a beautiful December 9th. Based on registrations and vendor conversations, I estimate more than 700 interested people came out to see eighteen Light-Sport Aircraft models. Both numbers represent a zenith for the series that has gone coast to coast and back producing 13 events during 2005 and 2006. Literally thousands of pilots and newcomers were exposed to Sport Pilot/Light-Sport Aircraft through EAA’s popular tour. *** Brown Field distinguished itself in several ways: It was within a mile of the Mexican border. We shared the field with not one but two blimp operations. And, EAA Chapter 14 had the most intriguing facilities we’ve visited. Yet all participating EAA Chapters deserve another thanks for supplying facilities to host the tour plus volunteer labor without which these events could not have been done. LAMA members and industry professionals are equally grateful for EAA National’s support which has been considerable …financially, promotionally, and via staff expertise.