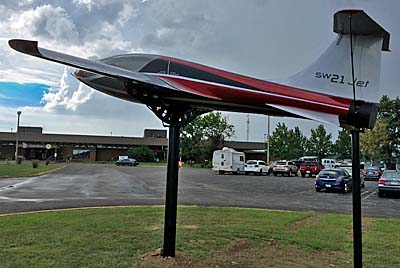 This article was updated with additional photos; see at bottom.

Midwest LSA Expo held a special ceremony to honor two men in their donation of a beautiful LSA-like aircraft now permanently displayed on an striking pedestal near the airport entrance.

Lots of airports have military aircraft mounted on pedestals. Even AirVenture, base of the homebuilders, has military fighters on raised displays — including the famous “jet-on-a-stick” near the show entrance. These displays honor a warbird heritage but those aircraft aren’t what most members fly.

Midwest LSA Expo has now reached its 10th birthday, staying focused on showcasing this sector of aircraft. So, perhaps it is fitting that today they had a ceremony honoring a donation of a futuristic jet LSA design (technically “LSA-like”). To properly display an aircraft built to be a mockup, airport manager and dynamo Chris Collins organized an effort to make a handsome pedestal for the aircraft. Chris and team had to firmly cradle the aircraft to weather the elements. That they did it so artfully is icing on the cake. 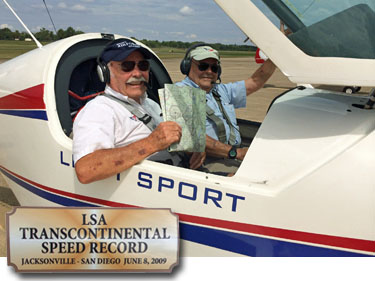 At a ceremony to thank brothers Jon and Ron Hansen, who donated the “jet on the stick,” Chris got the mayor of Mt. Vernon and other officials to make an appearance. SW21 Jet is another creation of the fertile mind of Hans Schwöller, the man behind the stunning SW51.

Jon and Ron Hansen are figureheads in the LSA game since day one. Hansen Air Group was the first U.S. distributor for Tecnam and helped introduce the large Italian manufacturer to Americans. Today Tecnam manages its own U.S. outlet but Hansen gave them a good push forward.

Hansen Air Group has represented other brands such as FK Lightplanes, Sky Arrow, ScaleWings, and others. In particular, Hansen has been a key supporter of using LSA fitted with hand controls to allow handicapped persons take flying lessons. Although Hansen Air Group is gradually easing out of the business, Jon Hansen, brother Ron and Jon’s sons Mike and Mitch — all airline pilots — have been important people as the Light-Sport Aircraft industry grew. It’s fair to say, LSA would not the same without their long, steady input.

Although weather all around Mt. Vernon foiled the arrival of several paid vendors, the airport itself has been flyable nearly all of both days so far. Saturday, the 8th is the third and concluding day. 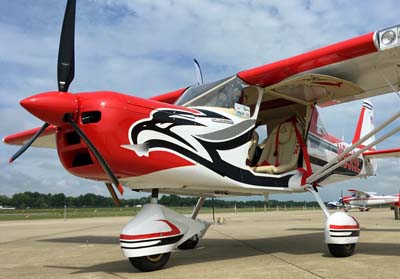 Vendors in attendance logged steady demo flights to prospective customers. I’ve written that Midwest LSA Expo is our very best location to do Video Pilot Reports (VPRs) and the same applies to getting a demo flight before you complete an order for a new aircraft. The show and Mt. Vernon airport are extremely good at providing this opportunity.

On opening day we did the Aeroprakt A32 Vixxen and Rans Aircraft’s S-21 Outbound.

Today, we captured the AeroEast Discovery 600 and a 914-powered Magni M-16 Gyroplane. Tomorrow, we hope to repeat. It takes a few hours to mount all the cameras, do a series of recorded landings and fly-bys, go evaluate the aircraft for an hour or so, and then record a video recap of the flight and the aircraft. Getting two of these done is an honest day’s work. (…then the editing starts — many more hours). 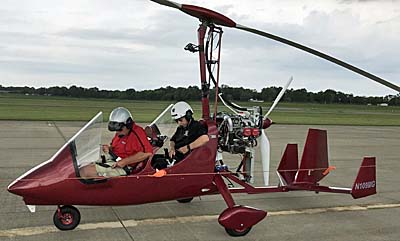 At dinner tonight we discussed the 10th year of Midwest LSA Expo with airport manager and Expo leader, Chris Collins. While he’s frustrated about the weather east and west Mt. Vernon and those who could not fly in because of it, those that did display gave a steady stream of demo flights and we captured video we hope you will like.

I’m calling it a winner.

Keep watching Videoman Dave’s You Tube channel as these VPRs are uploaded for your viewing entertainment and education. 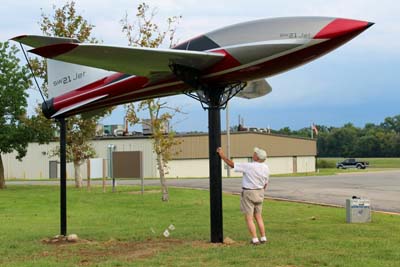 Airport manager Chris Collins forwarded more photos of the ceremony dedicating the SW21 Jet to the Mt. Vernon airport. Of the one with Jon Hansen reverently touching the main support for the aircraft he donated to the airport, Chris said, “I love this shot!” 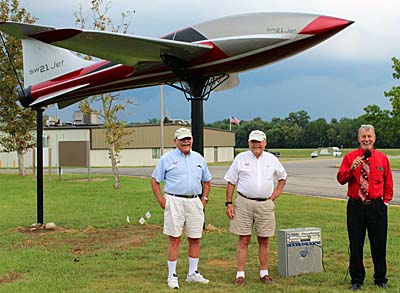 In the lower image, Chris identified all the parties that helped make this unusual light aircraft display possible.

Standing left to right are: 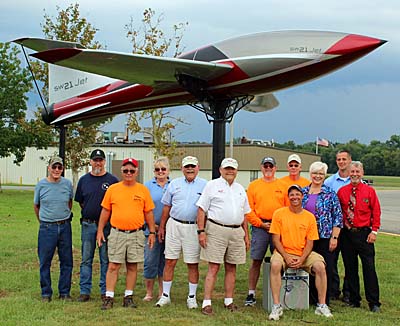