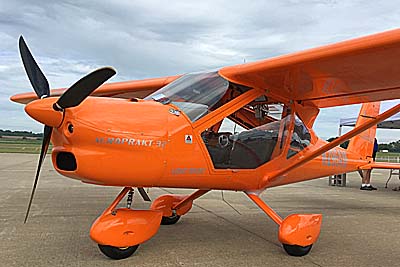 Many pilots expect the first appearance of a new model at the biggest airshows, but here’s one of those times when the sector-specific shows win. It’s all about timing and the new Aeroprakt A32 just won it’s SLSA approval (#147 on our SLSA List). The Midwest LSA Expo is the first show after getting its documents, so here it is!

Videoman Dave and I spent the morning working on a Video Pilot Report. We captured all the video, spent an hour flying with multiple cameras mounted, and recorded what we call the “stand up.” This segment comes after the flight when I — can you guess? — stand by the the airplane and review it on the ground.

We loaded A32 Vixxen with six of our Garmin Virb cameras plus Dave’s new Garmin 360 cam. It was our first with the latter and, no promises, but that may hold some user-controllable footage so you can go along in an even more realistic way.

Here’s How A32 Looks and Feels

You’ll get the full treatment when Videoman Dave finishes production for his YouTube channel that so many of you love. Here’s I’ll hit the highlights of what I learned. 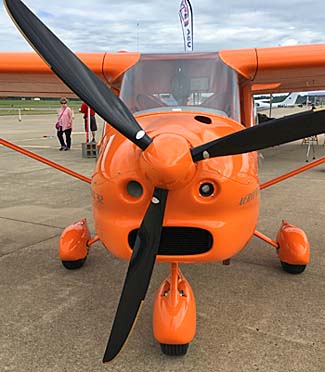 First blush: This is a great flying airplane, reflecting Aeroprakt’s experience producing more than 1,000 of the predecessor A22LS, once also known as the A22 Valor. In A32, engineers have incorporated many refinements. The general appearance is similar but the changes are many.

One measure of success is a widening of the flight envelope. Top speed increased to 130 mph, as we witnessed in a low-altitude upwind and downwind run with the carbureted Rotax 912 ULS at 5500 rpm. A-22 would max out at about 105 mph, so this was a pretty solid 20% bump. Yet A32 retains the earlier design’s low speed capabilities. We saw stall in the low 40 mph bracket and witnessed airspeed into the high 30s without loss of control.

Of course, these exercises were preparing for stall evaluations, which proved to be some of the most benign I’ve experienced in a Light-Sport Aircraft. Stall break was extremely mild with little fall-through and while a wing dipped, it recovered itself. I never added power for recovery to normal flight and altitude loss was minimal. Excellent! 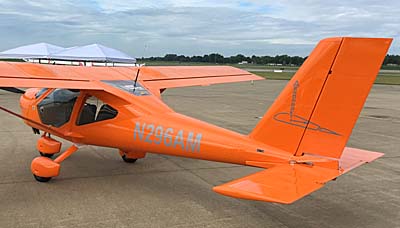 When deploying or retracting flaps, the pitch change is very minor. True, two notches is only 20° of flaps but deploying them made quite an aerodynamic change, just not a pitch change. On one landing I made with no flaps, I had to raise the nose significantly high to put A32 on the ground.

A32 uses a full flying stabilator, a change from A22 and it was more responsive than the former. It will take a bit longer to get used to but it is a powerful surface. On takeoff, importer Dennis Long demonstrated how immediate the stabilator will lift the nose off the ground. In fact, that’s his preferred takeoff technique: power to full, almost immediately pull aft on the Y-stick, control the nose so it sits a few inches off the runway, and let A32 then fly herself into the air. I followed his method and it worked wonderfully well. 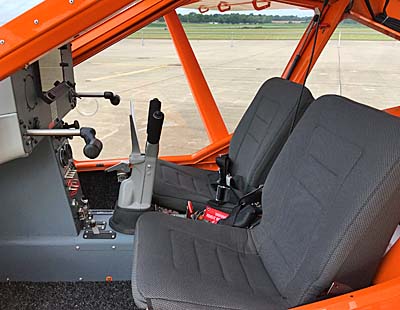 A32 uses the identical wing from A22 from the fuselage root out. However, the many clean-ups of the fuselage — and they are many, which you will see more fully in the Video Pilot Report to follow after editing — make the new model more efficient. A pilot literally has to work at getting it back on the ground …and that’s a good thing.

I reduced power to 3000 rpm abeam my touchdown target and then began to retard speed, lowering one notch of flaps after we got in flap speed range (<93 mph). On base leg I had both notches in and was monitoring my speed carefully. Using 60-65 mph was fine on base turning final but I moved it to 55-60 on short final and was ideally at 50-55 over the numbers.

With two notches of flaps and with a modest headwind, A32 landed very short. You have excellent visibility on landing as you do in flight in A32 Vixxen. It lacks a skylight but otherwise offers a wide view all around. I could even watch as the main gear touched down (when Dennis was controlling the aircraft). 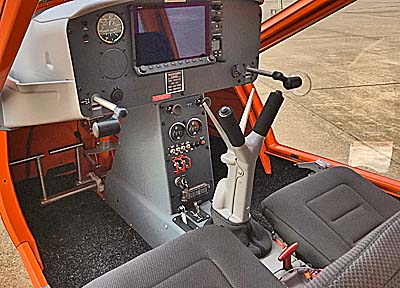 Takeoff and landing has been quoted at “under 100 meters” (300 feet) and I believe it. No question it was short, assuming, of course, decent technique.

A32 Vixxen was easy to fly with a joystick that provided enough feedback yet offered crisp response. In flight, I found the aircraft very well behaved and suitable for less experienced flyers, naturally assuming proper instruction and transition training.

In all, I think Aeroprakt has a winner. Dennis Long equipped this particular example with most available options, including the Magnum airframe parachute system and Dynon HDX digital instrument plus autopilot. The still-available A22 starts at around $85,000 and even this deluxe A32 is a reasonably modest $135,000 — lower cost A32s are possible if you don’t need all the fancy gear.