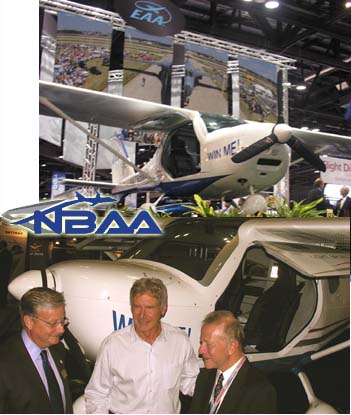 The Flight Design MC is on display in EAA’s space at NBAA. Posed in front of the MC to speak to the press about the Young Eagles program are Cessna CEO Jack Pelton (left), actor Harrison Ford, and EAA president Tom Poberezny.

Earlier it appeared that the Flight Design MC would be the first Light-Sport Aircraft ever displayed at the giant National Business Aircraft Association show. NBAA is the organization representing business jets plus a large range of exhibitors serving executive transportation. The trade show happening now in Orlando is a stupendous event with many more exhibitors than Oshkosh. Numerous displays are fantastic creations that cost more for a three-day show than LSA producers spend to market themselves for an entire year. *** So it is fascinating indeed that any LSA would be present at this event. And, in fact, two are seen by the bizjet crowd: the MC and Icon‘s handsome amphibious LSA project, the A5. Icon mounted their own display and reported good response, especially when one of their team hits the auto wing fold button. Even jaded aviators tend to have a jaw-drop reaction to this feature. *** Flight Design’s 2009 MC is part of EAA’s large display at NBAA because the new LSA model is the organization’s Sweepstakes airplane for 2009. Among NBAA attendees are many who serve that market but cannot afford their own sophisticated, expensive jet aircraft. Therefore many appeared to show an interest in LSA airplanes they could actually purchase.