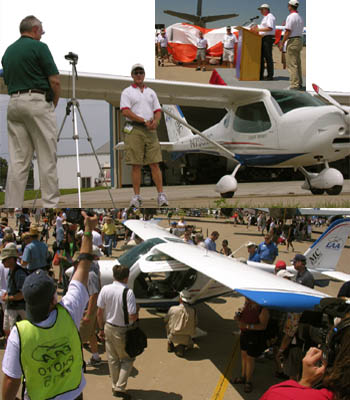 A metal (aluminum over steel) LSA from Flight Design, the all-new MC resembles the top-of-the-line CTLS but offers even more cabin room and easy entry. Flight Schools have said they like an easily-repaired metal aircraft for flight instruction.

OSHKOSH UPDATE — At a ceremony on EAA AirVenture’s show-center location, AeroShell Square, Flight Design unveiled another new LSA, their second of 2008, the first being the CTLS which debuted at Sebring in January. Amid opening day excitement, numerous media representatives captured photos and video. A large crowd surrounded the MC when Flight Design CEO Matthias Betsch and U.S. importer Tom Peghiny took the stage. After a few words of introduction and on cue from Betsch, Flight Design representatives removed a parachute canopy used to hide the MC from view. *** The MC — for Metal Concept — is similar in appearance to the CTLS but is constructed mainly of aluminum skin over a welded steel structure that provides great durability and occupant protection. Flight Design expects the MC will have strong appeal to flight schools. Cockpit entry is even easier thanks to a lower threshold and a door that reaches well forward. At 51.6 inches, the cockpit is among the widest of all LSA. *** MC is available with 80- or 100-hp Rotax 912 and analog instruments or a digital flat-screen display (glass) cockpit. Base price is $98,000; nicely equipped for $113,000. Flight Design teams in Germany and Ukraine worked on the new design for three years.