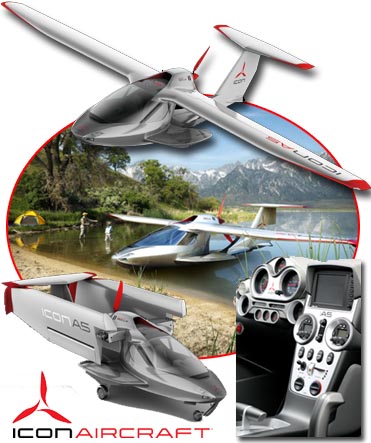 The amphibious Icon A5 is full of seriously-cool features (think Apple computer) but one right out of James Bond films is the Automatic Wing Fold system that can open or close the wings with human effort limited to pushing a button…sounds mighty convenient while on the water. Watch the unveiling.

One glance at almost any view of the Icon A5 will tell you this isn’t like any Light-Sport Aircraft you’ve ever seen. Oh, the Nexaer was shapely and showed innovative thinking. And certainly, we have many fine LSA on the market. Yet nothing I’ve seen compares to the Wow! factor that comes when your eyes feast on A5. *** In a grand ceremony attended by 550 invited persons at company headquarters near LAX airport, Icon finally pulled the concealing drapery off their new LSA. Unless you’re a contractor assisting Icon, you’ve probably never heard about the project, a tightly-guarded secret. *** This idea was given birth at Stanford University by F-16 fighter jock, Kirk Hawkins. He’s enlisted as impressive a team as I’ve seen since Cirrus burst on the market exactly 10 years ago. For example, Icon’s engineering staff is composed of the top people from Burt Rutan’s Scaled Composites. The group creating the A5 formerly put their brain power into SpaceShipOne and Global Flyer, among many other projects. Vern Raburn of Eclipse jet fame is on the Icon board of advisors. Marketing experts were hired away from Red Bull. The eye candy interior of A5 employed auto stylists from BMW, Porsche, and Nissan. This story is just getting started, but those who want to touch and feel this dreamy LSA need only show up at EAA AirVenture Oshkosh 2008, where A5 will make its public debut.