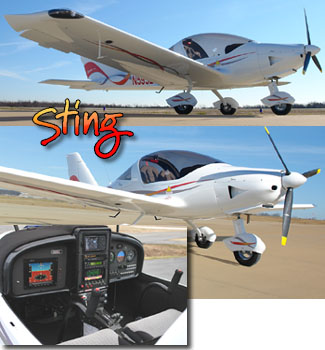 Those attending Sebring LSA Expo can examine S3 live and up close. Sebring starts tomorrow and runs through Sunday the 20th. C’mon down, y’all!

SEBRING 2008 UPDATE — Through the first three years of LSA sales StingSport from TL Ultralights has earned the #7 rank equaling an estimated 5% of the U.S. market. The new Sting S3 should push the popularity of this 98% carbon fiber low wing. S3 has a new fully-tapered wing and redesigned elevator trim. According to Bill Canino, president of SportairUSA, “Lower stall speed, shorter take-off roll, faster climb rate, balanced controls and exceptional slow flight characteristics are among the results.” Clean stall speed is 39 knots (45 mph); with full flaps stall comes at 34 knots (39 mph). Cruise speed at 75% power is 116 knots (133 mph), according to SportairUSA. “Rate of climb with the 100 hp Rotax 912S is better than 1,100 fpm and take-off ground roll has been measured at 255 feet,” added Bill. *** A basic fly-away Sting S3 including the GreenLine EMS is priced at $102,900. Load it up with an advanced analog panel or the Dynon EFIS D100, Garmin 496 with weather, SL40 radio, GTX327 transponder, PCAS collision avoidance, plus night lighting and S3 becomes very well prepared for cross-country flight at $120,500 to $123,500. In addition, StingSport comes with a long list of standard safety features such as airframe parachute.