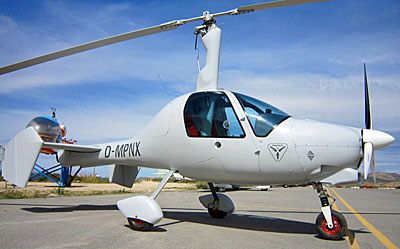 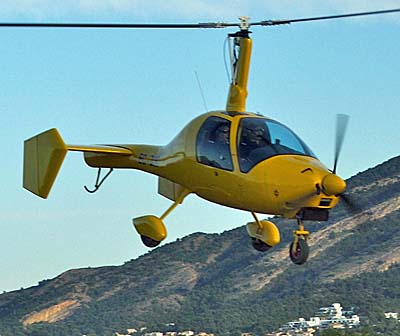 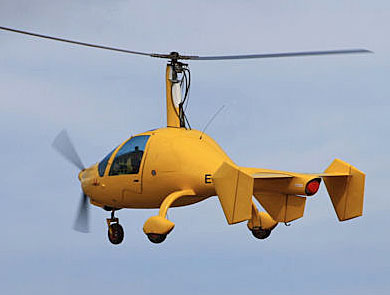 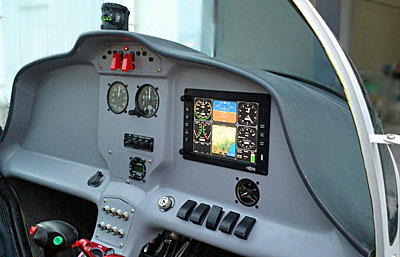 (Images updated 9/2/15)
Are you intrigued by airplanes that spin their wings? Helicopters are out of the budget for most pilots but have you ever sampled a gyroplane? Whatever your answer, you should know that Rotax Aircraft Engines reports selling more 912 powerplants to gyro producers than to any other airplane segment. Most of those are sold outside the USA.

Americans like and do fly gyroplanes, of course. Most associate the type with the Bensen Gyrocopter, but the history record reveals its overseas start. Again today, gyros are predominantly a non-U.S. phenomenon, a fact LAMA is trying to change through its advocacy efforts to press FAA to reconsider the fully built SLSA gyro as once envisioned under the SP/LSA rule.

While most pilots can identify a gyroplane, they mentally picture an aircraft with the engine in the rear. That isn’t always the case, though.

How about the “odd” looking gyroplane pictured with this article, with its tractor engine? This configuration is sometimes called an autogyro while Bensen-style designs used the term gyrocopter. Today most use FAA’s preferred “gyroplane.”

We’ve seen some other development of the front engine autogyro, for example the stylish and handsome (though non-Light-Sport Aircraft) Bulldog developed in Britain.

Nonetheless a clear majority of gyroplanes use a pusher configuration that some say is useful as it assures significant airflow over the tailplane. Experts say the use of vertical surfaces aft of the aircraft has significantly aided the stability of gyroplanes. While most gyroplanes we see in the USA are pushers, Phenix Aero based in Colorado is acting to balance the equation.

The U.S. importer portrays their product this way. “Invented by the Spanish engineer Juan de la Cierva to create an aircraft that could safely fly at slow speeds, the autogyro was first flown on 9 January 1923, at Cuatro Vientos Airfield in Madrid. De la Cierva’s aircraft resembled the fixed-wing aircraft of the day, with a front-mounted engine and propeller in a tractor configuration to pull the aircraft through the air.”

After de la Cierva, a Spanish engineer, participated in a design competition in 1921 to develop a bomber for the Spanish military his three-engined aircraft stalled and crashed during an early test flight. Troubled by the stall phenomenon he vowed to develop an aircraft that could fly safely at low airspeeds. The result was the first successful rotorcraft, which he named Autogiro in 1923.

For more of the colorful history of the autogyro and gyroplane, check this detailed article with further credit back to Wikipedia.

All Phenix models share the same basic features of two side-by-side seats in a fully enclosed composite carbon fiber fuselage, much like the most recent European pusher configuration gyrocopters (see photos in this article).

The rotor blades are extruded solid aluminum. Digital EFIS instruments are provided by MGL Avionics. The cabin has a spacious and comfortable interior (photo) with good visibility and a cargo area behind bulkhead.

Thanks to Phenix using turbo charged, fuel injected engines from MW Fly, the company boasts “great performance and fuel economy.” Powerplants range from 130 to 150 to 190 horsepower, although these engines have no U.S. certification and have not declared meeting ASTM standards. This does not presently matter since all gyroplanes in America receive airworthiness certificates under Experimental Amateur Built. Earlier models of the Phenix, first introduced in 2009, used the Rotax 914, offering a quick solution were FAA to finally allow SLSA gyroplanes.

One of the most interesting features is a ballistic recovery parachute mounted at the far aft end of the Phenix. As I used to work with BRS Parachutes, I picked up on this right away. BRS engineers often worked on emergency airframe parachutes for helicopters and gyroplanes but that spinning disk flies around right where the parachute wants to go after deployment. Supertough Kevlar connecting bridles that attach parachute to airframe can withstand the whack of a rotor but not the thinner nylon lines that support the parachute. In most deployment scenarios the conflict was sufficient to postpone parachutes for gyros, although a few interesting ideas were proposed by other developers (see last news item in this article). The rear location might remedy the problem.

Phenix Aero adds, “The tractor configuration of the engine, plus placing the thrust in line with the center-of-gravity, eliminates the tail-wagging, bunt-over and power-pushover tendencies some pusher engined gyroplanes have.” Some who have flown the aircraft felt it had a rather long takeoff roll but landing roll is very short in videos available online.

Phenix is presently marketed in the USA by Cobus Burger of Phenix Aero International, LLC. Reach him at 303-903-2148 or via email.