Update 4/29/15 — See our just-posted video interview with Bulldog Autogyro developer Barry Jones for even more information about this airplane that has captured so much attention. 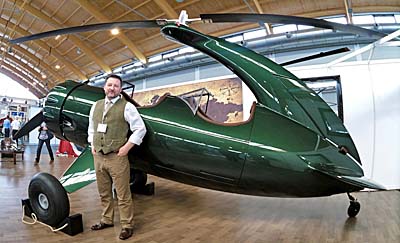 In the eleven magical halls of Aero, airplanes are packed into every nook and cranny. Because of the focus of ByDanJohnson.com, most of my time was spent in the “B” halls where B-1 through B-4 are exclusively the realm of light aircraft … a few kits but primarily ready-to-fly aircraft in a variety of descriptions. These include fixed wings and amphibians, gyrocopters, weight shift trikes, and even a few drones plus all manner of components like props, wheels, emergency parachutes, and more. About the only categories missing from the LSA segment of aviation are powered parachutes or airships. 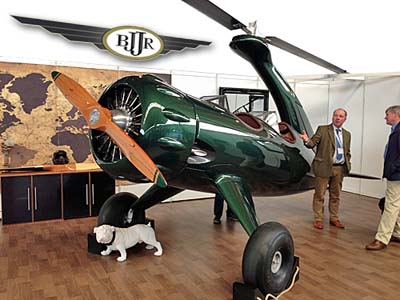 A few light aircraft are located in the “A” halls, partly due to available space being taken in the “B” halls and possibly as those vendors prefer to be on the GA side of the event. Most of the avionics, headset, and traditional aircraft companies are in the “A” side and some light aircraft manufacturers may see those buyers as their primary market. This is especially true for more costly aircraft or those that exceed the U.S. LSA category by virtue of having retractable landing gear and in-flight adjustable props.

To cover everything in the light space I made my way around all the halls. Via numerous conversations I was encouraged to visit the exhibit of a radial-engined autogyro. I had my doubts because this seemed outside my usual focus and interest. However, once I came upon Bulldog Autogyro‘s distinctive and artful display, I realized this was an attraction that easily drew the eye. Perhaps you will find it as fascinating as did I. 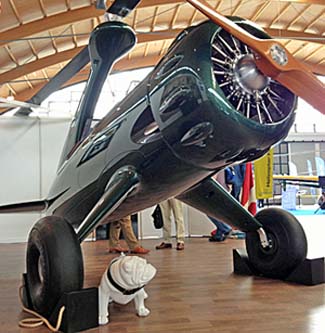 Let’s clarify. This is not Auto Gyro, the largest producer of modern gyroplanes. Neither is Bulldog a conventional gyroplane. It is an autogyro, meaning the classic taildragging, engine-in-front, more conventional airplane-looking, rotary-winged aircraft. One of the most well-known autogyros is the Pitcairn, a version that uses stubby conventional wings in addition to rotor blades. Bulldog further breaks the mold using no fixed wings.

Why pursue such a project in a age when we have many handsome gyroplanes? A proud Brit’, developer and company leader Barry Jones (seen in top photo) expressed his original goal, “For those that wish to own an aircraft of magnificent beauty, our Bulldog Autogyro pays homage to decades of British aircraft design and the iconic elegance of yesteryear.”

A very interesting and well-spoken fellow, Barry is a longtime military helicopter pilot who is well aware of modern gyroplanes but saw a niche and a way to show his pride in the rich tradition of British aviation. After leaving the military, he sought to pursue his dream and has done so with a panache and style not commonly seen in aviation. He chose a big round engine mounted in front of a sleek composite fuselage with a fashionable interior ending in an arcing rotor mast. 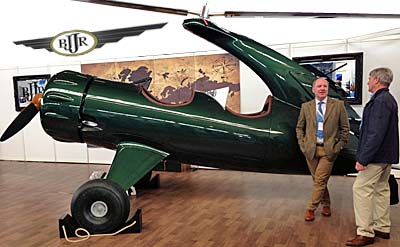 Why create such a graceful curved mast? Is it yet another feature to distinguish this unique aircraft. Yes and no. No, in that it is not just art, though it has that quality. Yes, in that it has real merit from a safety standpoint. Barry observed, “All helicopters and autogyros with tail sections to position a tail rotor or rudder to the rear of the aircraft can suffer from incidents when a rotor blade strikes the tail section. Through the Bulldog’s design, we have been able to completely remove this threat to pilots.”

Barry Jones’ concept is a machine one flies for the sheer joy of it. Going fast is not the objective, a reason he selected wide chord rotor blades among other design decisions. His mission to preserve an period of aviation history in a modernized aircraft should attract discerning buyers. I overheard some fellow journalists saying this was an airplane for classic car enthusiast types and that may be a fair characterization. Barry isn’t expecting to make thousands of these but he is expecting to make an impression on his buyers. He certainly made an impression on me and many others that often crowded around the airplane.

For a first build, Bulldog Autogyro as displayed at Aero 2015 looked terrific. Most prototypes are not so well finished. Barry has engaged several premium vendors such as a Formula I race car producer to help with the composite and a professional designer to create a fine vintage leather interior.

Barry expects to fly the Bulldog Autogyro in July 2015, just about as EAA AirVenture Oshkosh is beginning. I promised to keep watching and after he has some flying footage we may combine some of those scenes with the video interview I shot with him at Aero. Watch for it.