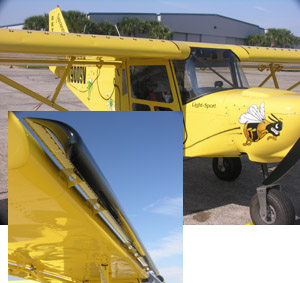 OK, this may sound complicated. Savannah is an Italian design which bears some resemblance to the CH-701 (though with numerous differences). It is being assembled by Skykits, a Canadian company with a U.S. location from parts fabricated throughout Europe. Got that? OK, let’s add more. Savannah is one fuselage with three diffferent wing variations. While I grant you these perform somewhat differently, I didn’t see them as each deserving their own airworthiness. But I’m not FAA…who, it turns out, did want three certificates to prevent owners from wing swapping. So, today, we have SLSA #39 as the “regular” Savannah with the fixed leading edge slat (inset photo); and #47 ADV model with a tapered wing with movable slots (rather significant differences); and the new #48 VG model, which has no slats, insteading using a line of vortex generators. Still with me? OK, finally, you can get all three models in ready-to-fly form, as an ELSA, or as a 51% kit. Whew! Choices are great but require that you do your homework.