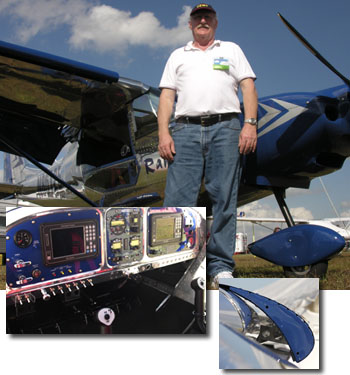 Eric Giles, a Canadian, is gaining U.S. incentives to relocate in Tennessee, so he can assemble the Italian-designed airplanes for American pilots after he certified them to a worldwide standard. Component parts come from far flung countries. Does anyone doubt the globalization of light sport aviation?

Rampage looks so dissimilar to its predecessors from Skykits that it took a second glance to make the connection. While it shares the STOL wing devices with versions of the Savannah, Rampage has a sleeker look that might broaden the appeal of these short takeoff and land designs from ICP of Italy. *** For those who got to see the new model at Sebring the airplane’s lines weren’t alone to admire. Deep blue paint was used in strategic accent to highly polished aluminum on most of the fuselage; Rampage gleamed brilliantly in Florida’s warm sun. The finish was brought inside where a polished aluminum instrument panel frame contrasted with royal blue inset subpanels (photo). Skykits director Eric Giles reported that the bright metal inside had not caused reflective problems on their long flight from western Canada. *** Rampage, the fourth SLSA model for which Skykits has gained airworthiness, uses electrically deployed leading edge slats to continue the impressive performance of the Savannah models. With flaps at maximum and the slats deployed, Rampage stalls at a reported 34 mph yet once the wing is streamlined, she’ll cruise at 116 mph. Takeoff occurs in only 131 feet says Skykits. Rampage is priced about $118,000 as shown in the photos.