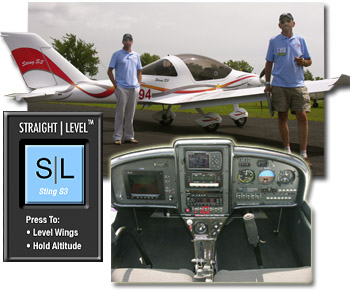 Bill Canino (right) is the U.S. importer for TL Ultralight and their Sting S3 and TL-3000 Sirius. To the left is David Dobogai, an American living in the Czech Republic to run TL. SportairUSA reports more than 70 Stings have been delivered in the USA and 500 are flying worldwide. See the Sting S3 at AOPA Expo ’08.

Recently I visited Cirrus Design. I saw progress on the Cirrus Vision jet and the new Garmin Perspective panel for the SR22. Both aircraft are full of high-end avionics. *** Down here in the world of Light-Sport Aircraft, we have far less costly choices for flat-screen avionic displays (panels in the Vision or SR22 literally cost more than an entire LSA). Yet the data each set of instruments uses is identical. LSA are also often equipped with autopilots…again, far less expensively compared to the certified units GA builders install. *** Recently SportairUSA announced their new “Straight & Level” button. If you find yourself in the soup unexpectedly, the pilot or passenger can push one button causing the autopilot to take over by guiding the airplane while the occupants assess their next move. It’s a brilliant idea to give pilots a breather. “The Straight and Level system is a significant advance in flight safety for Sting owners,” says Bill Canino, operator of SportairUSA, “That’s why we are providing it at no additional cost on all of ourTruTrak EFIS/autopilot equipped Stings.” The SL button even turns the autopilot on if it was off…a mighty smart airplane at a fraction of the cost of similarly equipped GA airplanes.