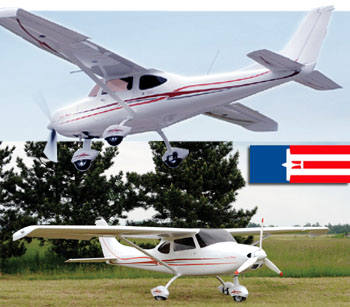 At EAA AirVenture Oshkosh 2007, SportairUSA displayed a full-size mockup of the TL-3000. A production prototype is planned for July and production should start later in 2008. SportairUSA expects an SLSA-certified version to be ready for the USA by the first half of 2009.

You might say it’s Sirius when TL-3000 takes to the air for the first time. Kidding aside, the new model’s U.S. importer is seriously happy about their composite high wing making its initial flight. Czech producer TL-Ultralight makes the sleek low-wing StingSport that SportairUSA has been selling since the first SLSA lifted into American skies. In development since 2006, TL president Jiri Tlusty recently flew the carbon fiber TL-3000 for the first time. *** SportairUSA boss Bill Canino was recently in Czech Republic making arrangements to market the TL-3000 alongside the Sting S3, an advanced generation version of the TL’s successful low wing model. The Arkansas-based importer says the 46-inch wide Sirius is powered by the 100-hp Rotax 912S, has a useful load of 600 pounds, and extended range with fuel capacity of more than 30 gallons. *** As with StingSport and Sting S3, TL-3000 will come standard with high-end safety features such as a Galaxy rocket-deployed parachute system, PCAS collision avoidance, and AmSafe 4-point inertial-reel seat belts. Easy entry and plenty of legroom are further benefits, said Sportair. TL-Ultralight reportedly has more than 500 aircraft flying around the world.