A common question from affordable aviation enthusiasts asks about four stroke engines, either for genuine Part 103 ultralights (available but somewhat more challenging) or for very light aircraft. Such inquiries are commonly for aircraft that have previously used a Rotax 582. 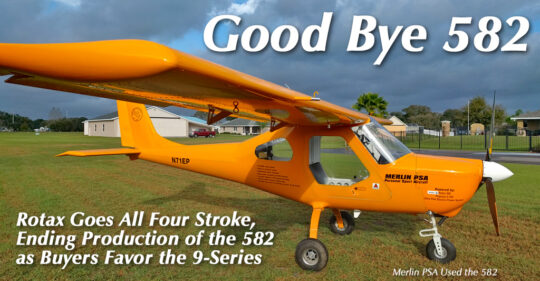 The last two-stroke offered by the big Austrian engine manufacturer — builder of the ubiquitous 9-series four-stroke engines — was the Rotax 582. Producing 65 horsepower and earning a good reliability rating over many years, the 582 has been a dependable powerplant for the lightest powered aircraft that are larger and heavier than genuine Part 103 ultralights.

The one and only airshow in 2020 was the Midwest LSA Expo… about to start this week!

Two years ago, in preparation for the show, Chip Erwin lit up the blogosphere with his Merlin Lite entry (image below). Here’s more about that all-metal, weight-making Part 103 aircraft (our most-read article of 2020, which was then our strongest year ever). 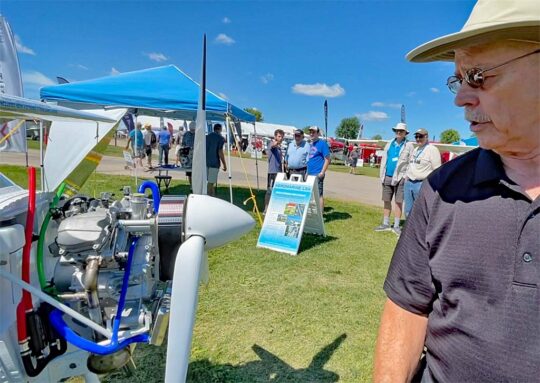 At Midwest 2020, Chip also introduced an engine he called Hybird. No, not hybrid (I had to correct my spellchecker three times on that one; it did not like Chip’s alteration of the letters).

“The Aeromaine Vtwin is a 60 horsepower, liquid cooled, four-stroke, fuel-injected, electronic-ignition engine with electric starting,” Chip summarized. “This engine incorporates state-of-the-art technology with decades of reliable history and many in service,” he reinforced. 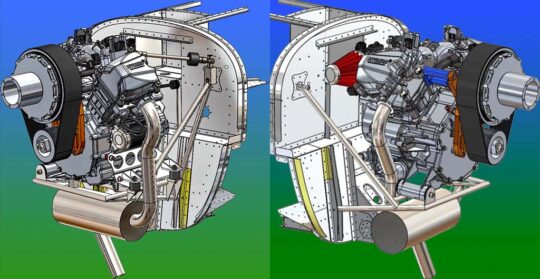 An engine built in the thousands per month makes a solid foundation yet it isn’t factory ready to be mounted on an airplane. That requires some added components.

“Our matching reduction drive with custom CAD-designed and matched propeller results in the perfect power system for the Merlin aircraft at an excellent price,” Chip maintains. “The Vtwin engine is supplied with a reduction drive and complete Merlin firewall forward package including including: engine mount, Merlin cowl, Aeromarine-LSA carbon propeller and spinner, radiator, and all fittings.

How about this? No TBO!

That’s right. Chip claims you never need to overhaul your Vtwin. Why not? “Our engine replacement price is lower than the cost of most overhauls, so it is cheaper to buy a new engine.” 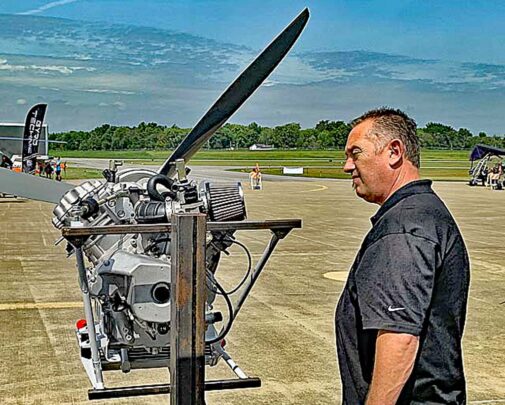 Why did Chip venture down this path? Wasn’t developing an airframe and its many aspects enough challenge? The departure of HKS from the aviation market was one driver.

“The void in the availability of a 50-60 horsepower, four-stroke aircraft engine may be one reason that there are few single-seat aircraft,” Chip speculated. “Rotax has reduced their offers of two-stroke engines and most pilots prefer four-cycle.” 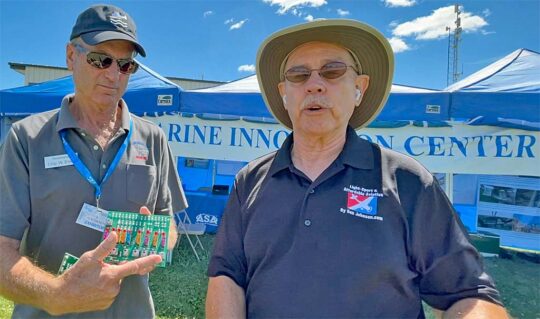 Chip Erwin is something of a perpetual-motion machine as he innovates in the very light aircraft space, by which I mean single seaters. This underserved category has a following and Chip’s order book shows strong interest. As he reveals here and as you can see in the video below, one innovation to speed kit building involves custom circuit boards that help you wire your avionics.

Chip observed, “We have an exclusive agreement with the manufacturer of a CanAm-style Vtwin engine. We have created all the elements needed to transform the basic engine for aviation use. We even developed a custom carbon propeller made to match this engine’s torque and power curve and the Merlin’s speed range.”

Hundreds of thousands of this engine have reportedly been manufactured and put to the test in ATVs. These four-wheel, off-road vehicles are run hard in extreme conditions. They have proven themselves to be very durable and reliable. Chip believe this is a perfect pre-qualifier for the Vtwin in aircraft use. He added, “This engine is very modern especially compared to nearly every aircraft engine. It has electronic ignition and fuel injection. And it is designed to be run at high power settings.”

Cost of a Vtwin?

Aeromarine LSA is offering the Vtwin engine with reduction drive and wiring harness for $7,250. This price is for people building another aircraft or replacing a Rotax 582 on one they already own. For more details, contact Aeromarine LSA. 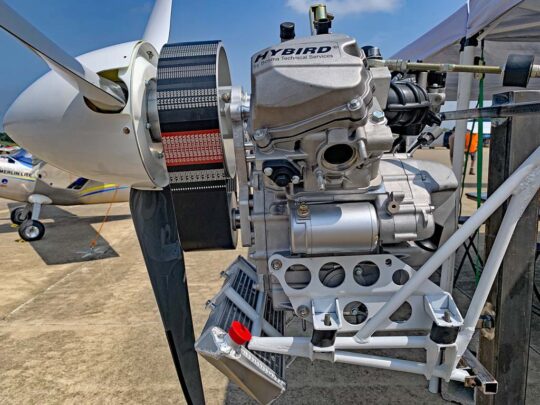 To install on the Merlin, Aeromarine LSA offers a complete package of firewall-forward components for $10,750, including engine mount, Merlin cowl, Aeromarine carbon propeller and spinner, radiator, and all fittings.

If you want features that exceed a Part 103 Merlin Lite, you will need to assemble a kit so you might like to see an example of the instruction quality. Here are the instructions (a PDF file) that Aeromarine LSA has produced to install their redrive assembly. 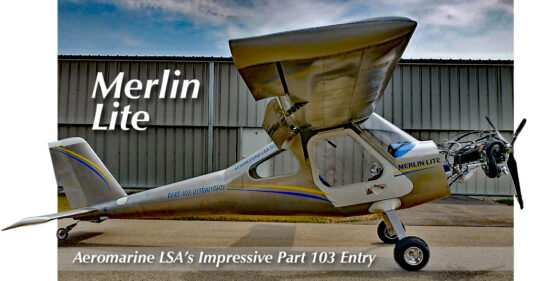 When Chip first introduced the Merlin Lite at Midwest LSA Expo 2020 it was nothing less than a sensation, especially after it was weighed to prove it could make Part 103 (video — and, yes, it can make weight with an engine cowl that was not yet ready at the time this image was taken).

Get the Blog — Listen to Chip. He is full of information and brings an entertaining style. If you don’t get to see him at airshows, you can check out various videos and other content about his company and products right here.

Perhaps even better: read his blog which sounds just like him. It is up-to-date (his latest post was just yesterday). If you want to stay current on Chip’s progress, he uses words and photos to keep enthusiasts informed.

I expect to see Chip and team again at the Midwest LSA Expo — he’s a regular. Who knows what he might pull out of his hat for this event? Wait and see…!

Without my partner Videoman Dave, who was unable to make Oshkosh, I used a simpler approach to making some videos on my own. You’ll see too much of me in this one but try to focus on the cool Vtwin engine Aeromarine LSA is offering.