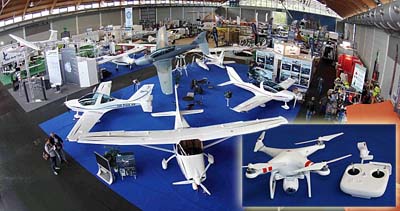 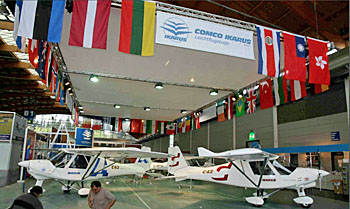 Flags of many nations fly over Comco’s exhibit, representing the dozens of countries sending visitors to Aero 2014. 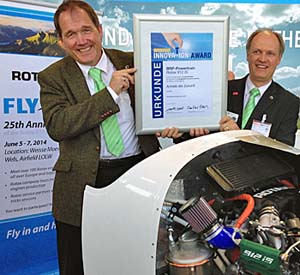 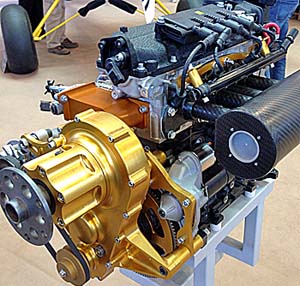 Diesel engines power most long-haul trucks, millions of automobiles in Europe and … very few airplanes. Yet they are surely coming as they can burn fuel available in many countries. The four cylinder DieselJet engine from Italy produces 115 horsepower (85 kW) and weighs 187 pounds (85 kg) dry. For more info: DieselJet 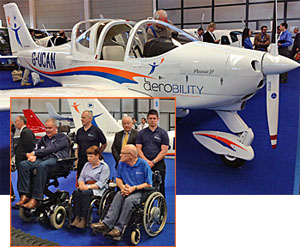 Tecnam produces not only the largest line of aircraft in the LSA space but reports building more than one every working day, a most impressive pace. To assist pilots requiring hand controls, they showed this Sierra fitted for use by disabled pilots in the UK. The British group receiving the Sierra is pictured with their Aerobility airplane. For more info: Tecnam Costruzioni Aeronautiche 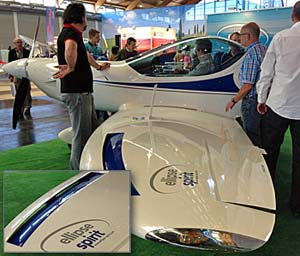 At Aero I have seen many very clever ideas for wing shape and air control over the wing. As elegant as any is the internally slotted wing seen here (pay particular note to the inset photo). However, the Ellipse Spirit wing shape is also beautiful with its gently curved leading and trailing edges, a technique also used on the horizontal tail (not seen). For more info: Ellipse Spirit 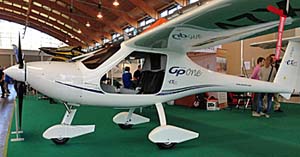 We’ve seen the Skyleader 600 at recent airshows in the USA. It’s a handsome all-metal low wing airplane with a backward hinging canopy. Jacksonville, Florida-based importer, Randell Dutton, indicated he will next bring in this GP One, which offers lower cost and is aimed at flight school use. It uses a different construction technique than other Skyleaders models. For more info: Skyleader GP One and Skyleader USA. 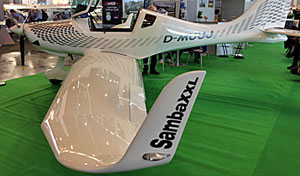 A few Samba LSA came into the USA although the current importer for Distar CZ only appears to promote the company’s Lambada motorglider. This airplane’s jaunty winglet and compound leading edge caught my eye but I was even more impressed with the creative graphic treatment that runs nose to tail. Europeans show a flare for presentation we don’t often see in the USA. For more info: Aeronautical & Industrial Resources USA 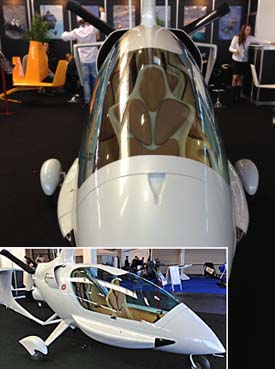 Spain is not a country from which Americans see many light aircraft but that could be changing as one importer I spoke to at Sun ‘n Fun may import a gyro from ELA Aviacion. The company has several models but this 10-Eclipse, debuted at Aero 2014, drew my attention more than any other. Inside and out, this is clearly an advanced state of the gyro artform. For more info: ELA 10-Eclipse 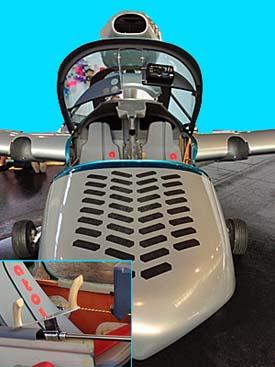 On a few occasions, I have written about Atol Avion’s Amphibian (earlier article). In their newest model shown nearly ready at Aero, I find a rare mostly-wood structure LSA candidate. Finland, way up near the article circle, is blessed with lots of high quality wood and lots of water. The airplane shows many clever design aspects, for example, staggered seating that explains two-position center control “yokes.” I’ll have more on it later. For more info, read: Atol’s blog

Aero 2014 is history now but sorting through all the discoveries and reviewing hundreds of photos I shot will consume more time. Just to give a flavor of the diversity in the halls, I present some images below with photo captions. As time allows I will provide several articles about aircraft and concepts contained in the great halls of Aero. One topic I will not cover is the large number of radio control or other model airplanes I saw. In some years, such can take an entire gymnasium-sized hall by themselves … fascinating! Yet the image you see nearby is a shot taken by a small quad copter (photo inset) with its wide angle lens. Such tiny flying machines are surely part of our future and seeing things below is part of their mission (for better or worse). My LAMA Europe associate and friend, Jan Fridrich, asked a vendor to shoot the image you see, which would not have been possible by any means other than a hydraulic lift. Instead, this took a few seconds and cost virtually nothing, which tells you all you care to know about the coming age of aerial surveillance.

In the images below, I offer you a further glimpse to accompany my first impressions piece and a couple articles presented since. Following these I expect to prepare articles on a variety of engines I saw at Aero plus a wider review of the many handsome gyroplanes one found in exhibit after exhibit. I took a look at several four seaters other than those I’ve already written about from leading LSA vendors (watch out Cessna, Piper, Cirrus, & Diamond!). I’ll write more about the wave of small, highly affordable aircraft being developed in response to lightened regulations … yes, rule writers actually loosen their grip on occasion, and when they do, innovation can blossom. I will also touch on aircraft from countries you hardly know exist, yet companies and their engineers in those nations have created some eye-catching aircraft. The world of aviation is rich at Aero. In their wrap-up news release, show organizers made these statements: “In global aviation, Aero has a strong standing; pilots and aircraft experts from around the world come to Lake Constance [in the very south of Germany].” At the end of the event facility CEO Klaus Wellmann and Aero project manager Roland Bosch gave a positive assessment of how the exhibition went for all participants, “With 606 exhibitors from 35 countries … a highly professional and international range of general aviation was present in Friedrichshafen [and an] audience from around the globe had the industry conference on its flight plan: 33,400 visitors came” representing a modest growth from last year.