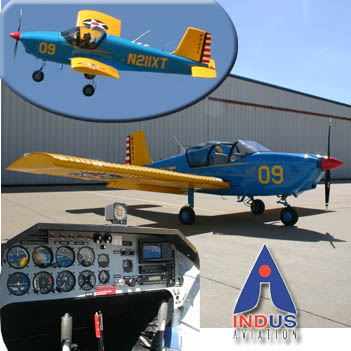 Thorpedo PT is painted blue and yellow in recognition of the primary trainers of the WW-ll era. The IndUS model sells for $85,985 with night VFR equipment and a “six pack” in the panel to accommodate the anticipated ASTM IFR training requirement for Light-Sport Aircraft.

I’ve lost track of the model count for Cessna’s 172, but the lesson of specifying an airplane to a task is not lost on IndUS Aviation. During Oshkosh, marketing man, Scott Severen announced the Thorpedo PT…not PT as in “Cruiser,” but Primary Trainer. Nor is it the Thorpedo LP, the company’s earlier model designation for LoPresti-inspired speed mods and visual enhancements. That variation was about gaining speed, where the PT suggests a basic flight trainer. *** Increasingly, mainstay LSA producers like IndUS are refining their product for instruction. Severen explained the cost effectiveness of the new PT model, “Savings are derived from are the four cylinder 85-hp Jabiru engine, which only burns 3.5 gallons per hour. With a lower cost TBO of 2000 hours coupled with the easily maintained all-metal airframe you have profitable trainer on the flight line.” *** My experience with the 80-hp Jabiru on the SkySkooter shows it to be capable in all but high elevations and then still markedly better than, say, a Cessna 150. Yet another choice for flight schools — certainly in other countries — is the company’s WAM-120 diesel-powered LSA that uses only 3 GPH. With AvGas at historically high prices, money savers like the Thorpedo models command extra attention.