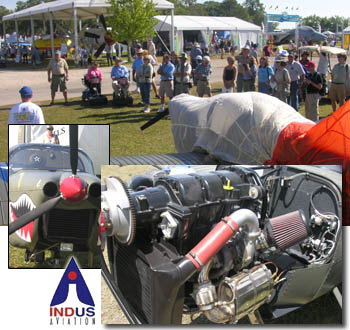 Rules for Light-Sport Aircraft allow plenty of room to experiment and IndUS took advantage with their new Thorpedo DP. The three cylinder engine is turbocharged and supercharged to produce 120 horsepower.

Sun ‘n Fun has been a rip-roaring success for Light-Sport Aircraft. The new LSA Mall right at the main entrance gate has been thick with traffic all week and even the weather cooperated after a day-before-opening deluge of rain (5+ inches in a few hours!). In the days ahead, I’ll have lots more LSA news for SPLOG readers. *** On Saturday, IndUS Aviation unveiled their first-in-the-industry diesel-powered Thorpedo DP. News media and interested parties turned out to hear IndUS leaders speak about the project. The Dallas, Texas-based company finally pulled back the curtain after months of work to reveal their WAM-120 three cylinder, two-stroke engine tucked neatly under their new shapely nose cowl. *** Turbocharged and supercharged, the 120-horsepower engine burns a mere 3 gallons of Jet A per hour. This fuel is widely available around the world (important to an international seller like IndUS) where 100LL is not. According to IndUS president Ram Pattisapu, “[The WAM-120 is] quiet and has unbelievable climb performance.” *** ASTM has a compression engine standard for diesel engines; IndUS is the first to use it and is presently pursuing certification of the Thorpedo DP. They expect to offer the aircraft for sale by AirVenture Oshkosh 2008.