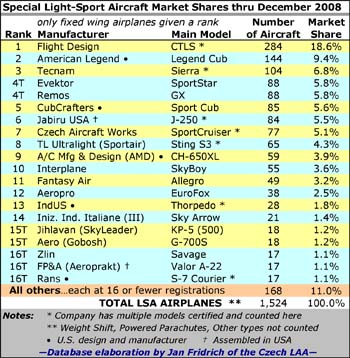 Shifting market shares — Evektor slipped a notch; Tecnam moved up one; Jabiru is up as are Remos and Czech Aircraft Works. Interplane and Fantasy Air dropped several positions though did well enough early on to remain in the top 12. The 80/20 rule applies as 20% of all LSA producer companies make 80% of aircraft sales. Compare to all-2007 results.

Agreement is widespread welcoming a new year; 2008 was hard on almost everybody…around the world. The new year may bring continued turbulence, but a feeling that things are starting to change is prevalent, based on my conversations with dozens of LSA professionals in preparation for this year’s Fifth Annual Sebring LSA Expo. From various locations around the country, vehicles and airplanes are headed to Florida — where, by the way, 60-degree temperatures are expected to warm those from the deeply cold north. *** In this SPLOG, I present year-end information which completes the report posted earlier. We hope for a better 2009 and a much-improved 2010; nonetheless, the LSA fleet continued to expand in 2008, with a net increase of 36% (though growth slowed sharply from the 98% pace achieved in 2007 — as the fleet enlarges, it becomes harder to maintain the high percentage growth). Positions #1 and #2 stayed steady, but lower down, several market shares changed (see chart legend) *** LAMA will host its Third Annual LAMA Dinner for members and industry professionals serving the LSA marketplace. About 300 are expected to the largest gathering of LSA professionals in America. Several other press announcements are planned; SPLOG will keep you informed.