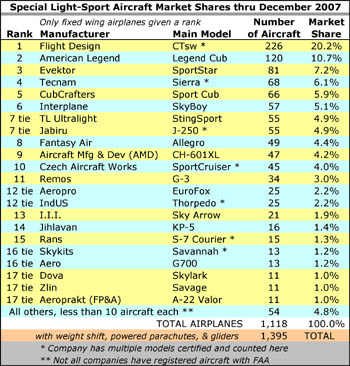 Year-end figures show excellent growth for Light-Sport Aircraft. Thanks to Jan Fridrich of the Czech Light Aircraft Association for several hours of work each month to compile data used to make charts on ByDanJohnson.com. The LSA industry certified 20 new models in 2007.

Light-Sport Aircraft ended a successful year in 2007 with sales up 98%, registering 565 new fixed wing airplanes for the calendar year for a total of 1,118 airplanes. Including weight shift, powered parachutes, and gliders (no gyro or lighter-than-air yet), total registrations for the year hit 720, up 120% over the previous year close and totaling 1,395 LSA nationwide. For comparison, the general aviation industry produced as many single-engine (SE) piston airplanes each quarter as the LSA industry did all year, and GA is expected to ship more than 2,200 SE pistons for 2007. Can LSA match that performance in the next two or three years? My forecast says, “Yes!” I estimated 600 for 2007 (we hit 92% of that target). I’ve forecast 1,000 units in 2008 and doubling that again in another year or two. If I’m right, LSA may someday meet or exceed all other SE piston sales in the USA. *** GAMA says the GA industry built 85% of SE pistons in the USA, where about two thirds of all LSA come from outside the USA. GA SE piston sales were off about 5% in 2007, perhaps an early effect of LSA taking some of those sales. But the GA industry need hardly be worried given their far higher dollar revenues and a continuing, robust upward trend for turbine and jet sales.