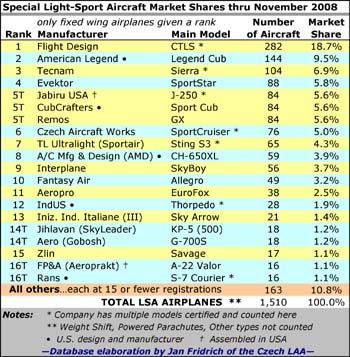 We still cannot count weight shift or powered parachutes as those database figures remain suspect. Though sales are off about 20%, pilots still want to fly and LSA still offer excellent value. I predict pent-up demand will balloon sales once customers perceive the economy to be improving.

With one month to go (and it’s hard to imagine a big December), we have figures to report for this most extraordinary year. We’re all (painfully) aware of the economic predicament, but how has this impacted light-sport aviation? Here’s my observations. *** In 11 months, the industry has increased fleet size by 35% to 1,510 fixed wing airplanes from 1,118 on January 1st. Annualizing the numbers, all airplane LSA should register 427 airplanes, which equates to about 35 aircraft per month, which means sales were about 20% off the monthly pace recorded since early 2006. *** Flight Design held its top spot and again delivered the most, but just barely. Remos has been the rising star of 2008 with a 147% increase over their total on January 1st. Tecnam became only the third company to pass 100 units registered. Other solid gains were logged by Czech Aircraft Works (up 69% in the year); Jabiru (up 53%); FPNA (up 55%, though from a lower number, which makes larger percentage gains easier); Aeropro (up 52%). *** In raw numbers, Flight Design lead, registering 56 in 11 months, Remos had 50, Tecnam had 36, Czech Aircraft Works had 31, Jabiru had 29, and American Legend had 24.