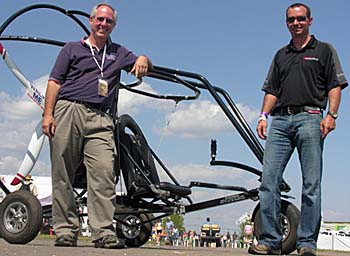 Checking out an e103 at AirVenture 2010. On right is Powrachute boss and Voyager ElectraChute developer Galen Geigley. On the left is Powered Sport Flying magazine publisher and PSF Radio Show host, Roy Beisswenger. 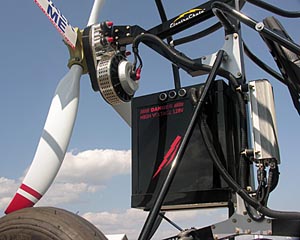 Lean & Clean – The tiny little motor with a belt-drive reduction and 128-volt battery pack plus a four-blade prop should let the Voyager fly for an hour on quiet(er) electric power. 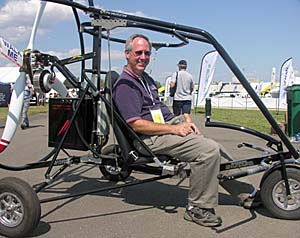 I am not alone in thinking Part 103 ultralight aircraft are the ideal platform for initial development of electric powered aircraft. Sure, someday you’ll be able to fly your 2-4 seater for 300-400 miles or more, recharge in the time it takes you to use the facilities, and be on your way again. But today, electric-powered Part 103s are available. *** You can buy the eSpyder for under $30,000 and fly for an hour or more. Accompanying photos show the Voyager ElectraChute from Powrachute, another possibility. Or, how about an electric trike? Longer-trip capability depends on better batteries. And thanks to a multibillion-dollar push from the auto industry, battery tech should develop rapidly. Ready for a short science lesson?*** According to an article in Nature Nanotechnology, researchers at MIT have developed a new method of adding carbon nanotubes to lithium-ion batteries that give the batteries the best characteristics of both capacitors and traditional lithium-ion batteries while simultaneously increasing their energy storage. *** Using layered carbon nanotubes as the positive electrode (the cathode) and a lithium titanium oxide as the negative electrode (the anode), batteries demonstrated an impressive ability to deliver power at the very fast rates of capacitors while being able to store more energy and last much longer than even the best lithium-ion batteries available today. *** Researchers dipped a base material repeatedly into a solution loaded with carbon nanotubes building up layers like a candle. Researchers referred to spraying techniques as a means to achieve mass production. *** All batteries are made up of three components: two electrodes (the negative anode and the positive cathode) separated by an electrolyte. When lithium ion batteries are producing energy, positively charged lithium ions move through the electrolyte and deposit at the cathode, which makes electricity. Alternatively when they are recharged, an external energy source such as your outlet causes these lithium ions to move the back across the electrolyte and embed in the anode.*** Because of the enormous surface area of the carbon nanotubes, the batteries can hold much more charge than traditional cathodes, enabling carbon nanotubes for the first time to serve as the positive electrode in lithium batteries, instead of just the negative electrode. *** At an energy content of about 200 Watt hours per kilogram, these experimental batteries rank way up with the very best lithium ion batteries, yet they also can provide very high short bursts of energy. As an added benefit, the carbon nanotubes seem to provide the batteries with an incredible durability. After 1,000 charge/discharge cycles, researchers saw no appreciable degradation in the battery’s function. *** In practical use, this could mean new batteries that can supply ample power, say, for climbing to altitude, and then hold a charge for much longer. Earlier studies have also pointed the way to extremely fast recharging. This is getting interesting!