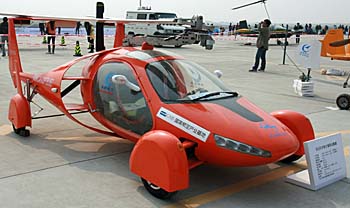 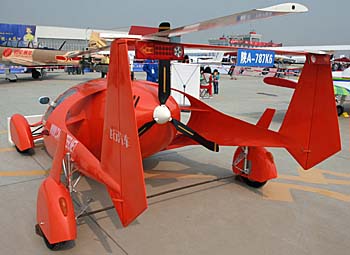 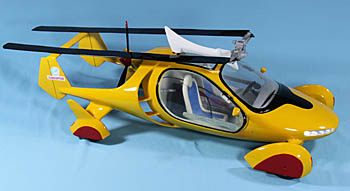 The flying car powerfully captures the imagination of many, pilots and general public alike, despite the fact that none (yet) have ever achieved market success. For some years this field lie fallow with no introductions for several decades. Then, thanks to the creation of the Light-Sport Aircraft sector came Terrafugia and their intriguing Transition. The Massachusetts enterprise has received enormous media attention. Similarly, the I-Tec Maverick also proved popular with journalists. Lately the SkyRunner from England gained plenty of coverage from a splashy introduction at the Fort Lauderdale, Florida boat show. Now, China has its hat in the ring. Consider Carcopter from ML Aviation Technology Co., Ltd.

Terrafugia uses folding wings and a pusher Rotax engine. I-Tec uses a powered parachute held in position by a telescoping carbon fiber pole. Carcopter is, as the name implies, a rotary winged flying machine. Think of it as a gyroplane but with a folding mast and rotor blades that fold aft. In one way this seems a good solution. Terrafugia exposes its wings to road rash or that idiot who opens his car door into the side of yours. I-Tec’s solution is highly portable but you have to stop and take time to unpack and lay out the large square parachute canopy plus erect and secure the long support pole. Carcopter is very James Bond-like with blades the company said can be put in position with the touch of a fingertip. Modern materials include a carbon fiber exterior with metal rotor blades and a rotorhead built with titanium. A Rotax 914 engine with 115 horsepower drives the prop and front two-wheel drive. Like any Rotax it can use unleaded auto gasoline supplied by an 18.5 gallon fuel tank (metric figures in table below).

“The flying car can be operated easily,” ML Aviation Technology CEO Chang Jian Qin told reporters. A button push reportedly changes Carcopter from flight mode to driving state. “When going from flight to auto traffic, just press a button to fold the main bracket and rotor.” Only 10 minutes is needed for the change from flight to driving or driving to flight. Chang Jian Qin continued, “Take-off does not require a special airport runway, as long as you have 100 feet.” He said the landing roll is only 30 feet, though he didn’t specify in what wind conditions either occurs. Training was also portrayed as simple. “You can learn to manipulate Carcopter after [a few] days of flight training.” In case problems arise, an emergency parachute is available for a safe landing.

“In 2010, the Chinese State Council issued views on deepening our airspace,” said Chang Jian Qin. According to him (and confirmed by other reports), China will gradually open the airspace below 1,000 meters (3,000 feet), to allow light fixed-wing aircraft and helicopters aircraft flying by 2015. For many years only military aircraft or airliners have been permitted in the airspace. See additional thoughts about flying in China from our report by Jan Fridrich. The downside? How about a price of 2 million yaun (Chinese currency), a figure that presently equates to more than $325,000. Are you ready to buy one?