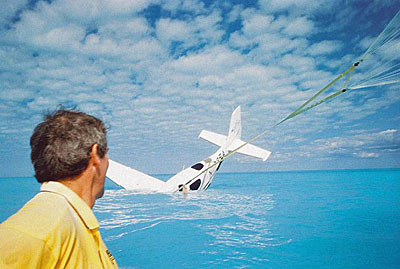 “You just saved my life!” It’s not often anyone, even a medical doctor, hears those words. Back in the ’90s I was sometimes on the receiving end of a call when a pilot phoned BRS to report a “save,” a sparing of a life by the use of a parachute. It is a humbling experience to have someone exclaim that you (and your fellow workers) are the reason they are alive.

A few days ago, it happened again, for the 400th time. BRS Aerospace documented the 400th and 401st lives saved, a worthy milestone in aviation safety.

“This milestone and all of the lives saved are a testament to Boris Popov, who conceived the idea and whose vision for the company he founded overcame initial resistance to the very idea of aircraft parachutes from some naysayers,” said BRS President and Director, Enrique Dillon. “The concept’s legacy are the pilots and passengers who survived to continue to live fruitful lives and the thousands of families who have enjoyed added peace of mind when their loved ones fly.”

The system is designed to be a last resort for pilots and passengers when all other attempts to recover the airplane in case of emergency or pilot incapacitation have failed.

Numbers 400 and 401 entered the BRS save logbook when the pilot of a Cirrus aircraft with an engine out deployed the whole aircraft rescue system over water more than 20 miles from Grand Turk Island in the Turks and Caicos. BRS reported that pilot and passenger were uninjured and that they were picked up by a cruise ship. 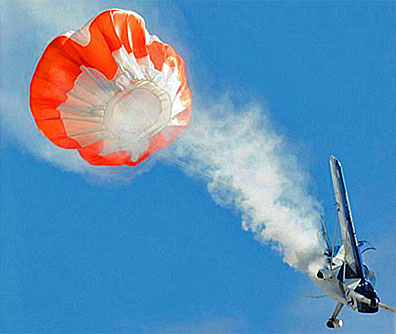 Check here to see if BRS can mount on a system on your LSA.

The BRS parachute system is deployed in life threatening situations by a rocket to slow the aircraft in the airstream and then lower it and occupants to the ground in a measured descent (artwork). The parachute and solid propellant ballistic rocket assembly are enclosed in a canister mounted inside the fuselage that is activated manually or automatically.

With more than 30,000 systems installed during the past 35 years on sport aircraft, certified aircraft, and military trainers, approximately one of every 120 systems has been activated as a last resort for pilot and passenger safety in potentially lethal situations.

“The idea of saving an entire aircraft through a deployable parachute system is an ingenious invention that deserves its place in the history of safer flight,” said Richard McSpadden of AOPA’s Air Safety Institute.

Numerous European and U.S. ultralight and experimental aircraft use the system, including Lancair, Carbon Cub, Kitfox, Glassair, Flight Design, Rans, Van’s RV 7/9/10, Kolb, Zenair, and Quicksilver. The BRS whole aircraft parachutes are available for light sport aircraft including CTSW, CTLS, Piper Sport Cruiser, Cessna Skycatcher, Bristell, FK-9 and Icon A5. Certified general aviation aircraft that fly with the system include Cessna 150, 152, 172, 182, and Symphony. Such a system is standard equipment on the Cirrus SR20 and SR22.