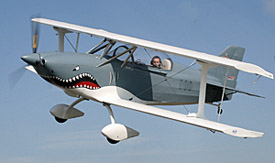 Comet Number 100 takes to the air. 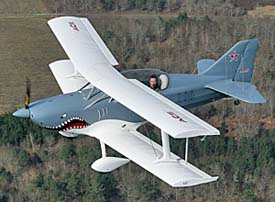 Comet is the only biplane among Light-Sport Aircraft.

How’s this for your minimalist trailer?

Peter Funk is a prolific designer of a high wing, low wing, and biplane. He created a sensation at Aero 2011 with this Lemans version of his Fk14.

Fk Lightplanes in Germany celebrated the production of Number 100 of their fascinating model the Fk12 Comet. This snappy handling, steady flying, folding wing biplane has no competitors in the LSA space, even with 123 total models winning Special LSA approval. At airshows here in America, Hansen Air Group has been showing the Comet to substantial interest. It has enough going for it that we’ve made several videos about it (at AirVenture 2011 and earlier at at Sebring 2011) plus a video mini pilot report. *** German designer Peter Funk (photo) — who I’ve known for many years — counts himself among those pilots who have a soft spot for biplanes. This interest stimulated the prolific designer to create a lightweight biplane way back in 1994. He said his intention was to build not only a plane preserving the classical style of a biplane but that would also provide good flight performance and be easily and comfortably folded up for hangar storage. Funk also wanted to be able to fly in winter so he envisioned a fully enclosed biplane though options provide for an open cockpit version for those of us who like some air in our hair. Comet entered production at the end of 1997 and today is one of the most widely sold biplanes in Europe. *** Peter said, “Comet is also most likely the only biplane in the world that has a laminar profile and it is most certainly the fastest of its kind.” Fk12’s sprightly performance and crisp handling lends it to aerobatic flying along with other design attributes. Its flight qualities and strong airframe (+9 -3 G) are leading to the installation of a Lycoming O-233* to allow fully aerobatic maneuvers. Rotax powers most Comets but the Austrian engine manufacturer does not permit their engine to be used in aerobatic flight. Peter clarified, “Comet’s airframe has shown compliance to FAR Part 23 acrobatic regulations and so can be used for basic acro.” He added that the Comet can accommodate larger engines up to 130 hp. The Lycoming is usually stated at 118 horsepower. *** “We don’t say Comet is something to compete with Pitts or Extra,” said Peter, “but it’s remarkable that even with the standard 100-hp Rotax 912 you have the same power-to-weight ratio at aerobatic gross weight to compare with a 180-hp Pitts or an Extra 200.” Peter noted, “At present we are preparing a Lycoming installation for the U.S. market that we will show at Sun ‘n fun 2012,” he said. Look for it at the Hansen Air Group display. *** “Remarkable details include the ‘five minute folding wing’ system, the full laminar wing section, and the opportunity to fly it open cockpit or closed canopy. Converting the cockpit configuration takes only a few minutes.” So, if you’ve been daydreaming about getting upside down in your Light-Sport Aircraft, you may not have to wait much longer.

* The Lycoming installation will soon commence at Renegade Light Sport, builder of the low wing, all-composite Renegade. The latter is supplied with the O-233 and the Missouri company’s knowledge about installing the Lycoming has attracted other companies to their new facility.